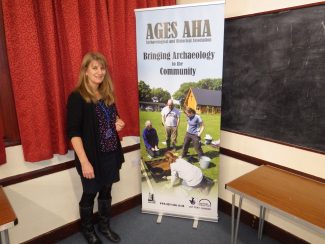 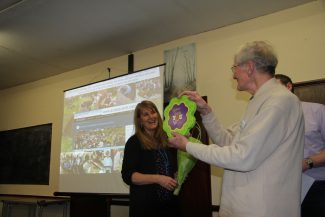 On 11th February 2015, many local residents and others wishing to support the idea of local archaeological test pitting joined AGES Archaeological & Historical Association at a special meeting at St Michael’s Church hall in Daws Heath.

This was part of a project supported by the Heritage Lottery Fund and was AGES first chance to display its new pull up banner which shows the 2013 dig at St Michael’s field and features AGES members and archaeologists from Access Cambridge Archaeology.

The digs in Daws Heath over 2013 and 2014 were directed by Dr Carenza Lewis as part of the Higher Education Field Academy (HEFA) and we were most fortunate to have the former Time Team archaeologist come and talk to local residents about the results from the Daws Heath test pits and how they have supported her Currently Occupied Rural Settlements (CORS) project, featuring villages from all across East Anglia.

In total, 23 pits were dug mostly in gardens and all the pottery dated to give an insight into how Daws Heath developed over the ages.

The digs showed up evidence of prehistoric worked flints and a post hole indicating a prehistoric structure in the valley between The Deanes School and Little Havens and, in the same area, medieval pottery probably from an early farm. Later pottery was found scattered from isolated farms by ploughing of fields, but it was not until after 1800 that there was a significant increase in residential occupation and the hamlet first brought into existence and later developed by 20th century estates into the Daws Heath of today.

Residents learnt how their generosity in allowing their gardens to be investigated in this way has added to the understanding of the development not only of Daws Heath but also of over 50 other villages in rural East Anglia.

Over the 3 years 2015 to 2017, the HEFA project extends to include about 30 test pits in Hadleigh gardens along with additional pits being dug by AGES AHA both alongside HEFA and others at 2 local fairs in 2015. (The AGES AHA pits at the St James Rectory Hadleigh Fair on 27th June and at the St Michael’s field Daws Heath Village Fete on 11th July will enable local residents to join in themselves with some community archaeology of their own).

On Thursday 14th May 2015, the test pit project will be based at the Hadleigh United Reformed Church and it is hoped that further local evidence will be produced and displayed for the public to see in the hall from 10am to 12 noon (at the Church coffee morning) perhaps confirming the early medieval Saxon origins of the town.