I should explain that I have been a volunteer with the Essex Wildlife Trust {EWT}  since 1993. Once I thought nothing of joining three work parties a week but age has reduced me to once a week in either Little Haven Nature Reserve or Valerie Wells Wood. During these virus days my exercise is walking around Daws Heath and I often choose the reserve for my constitutional. Here is a brief illustrated report from one such wander.

Sunday 26th April 2020. Awoke at 3.30am. Could not get back to sleep so read book for ages. Went back to sleep briefly and wide awake at 6.15. Had light breakfast and then as the weather was all blue sky and sunshine went for walk on the Little Haven Reserve, a bit before 7am. Huge bird song and no humans encountered so very pleasant – and safe! The sun was perfect for a few phone pictures.

5 acre field is one of many kept for hay for EWT funds. Many local horses have enjoyed our hay in their stables. None of the Little Haven fields have had any fertilisers or other additions since the Trust took them over 23 years ago. 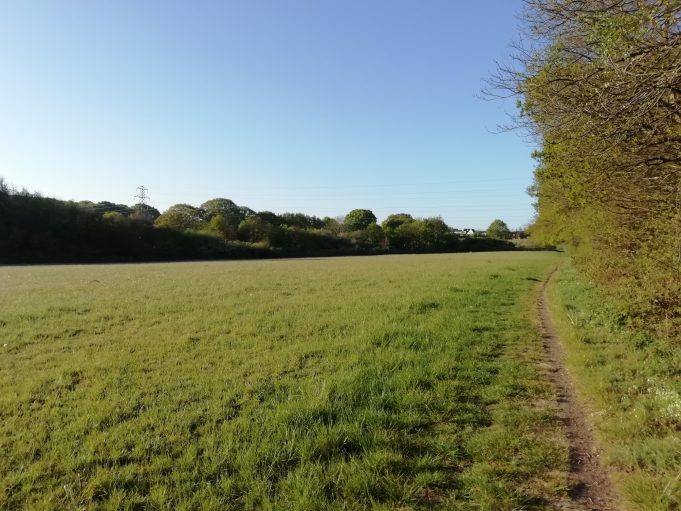 Wyburns Wood is in the north east corner of the reserve and its northern boundary is the A127. Our coppice site for the winter of 2019-2020 is against the eastern edge of the wood. My photo is of the coppice site as seen from one of the main paths. 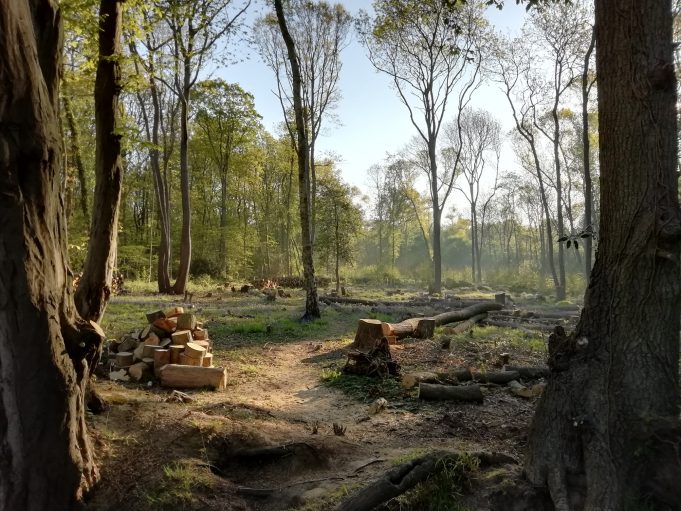 The cutting time (starting and completion dates) is controlled by the regulations in a licence provided by the Forestry Commission. Generally speaking we cut and then clear as we go along; although as happens sometimes we get behind and the finishing deadline of our licence to cut is fast approaching. This results in furious cutting to complete the one acre site.  Catching up on the clearing process is permitted to continue later but this time it has been delayed by the virus. That is why you can see quite a lot of wood lying around still. This photo of the coppice site shows the view from the path. 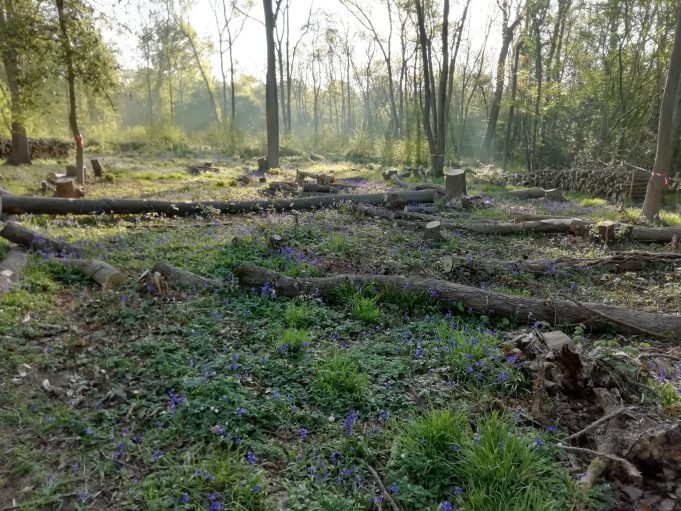 Look what has taken over in the next photo – bluebells everywhere. All the Daws Heath woods have wonderful bluebell displays. 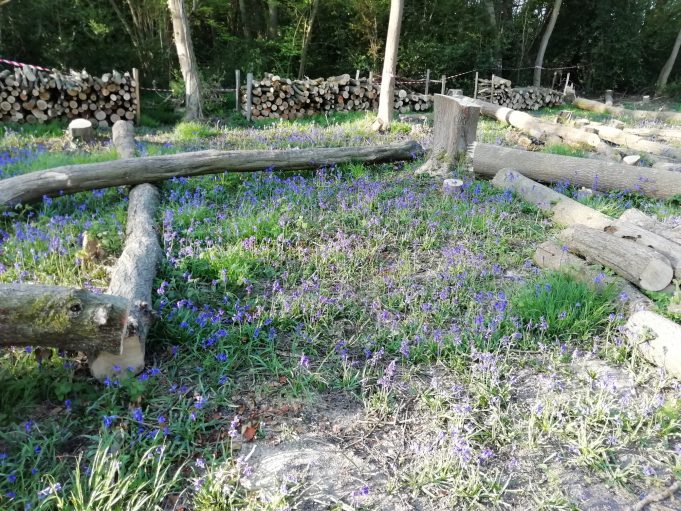 The two wood stacks in the next photo are the traditional cords i.e. 8’x4’x4′. Once the wood is in these fairly strict heaps it is much easier for the warden to calculate how much firewood he has for sale – EWT funds again. We have many customers and we always sell out. 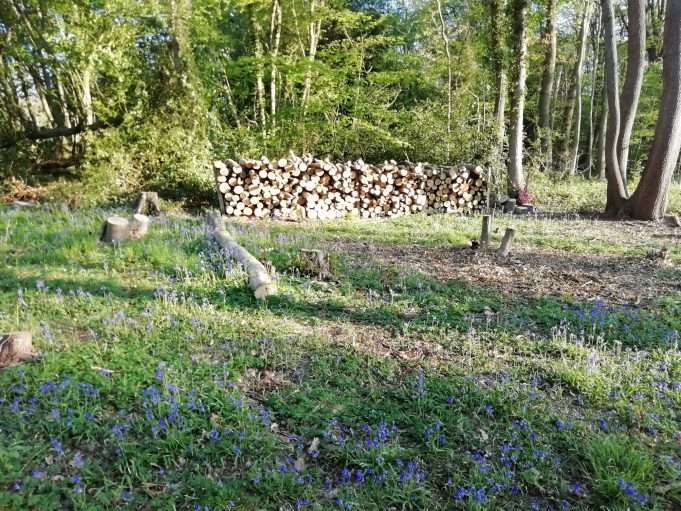 In 1999 there was only one small patch of heather in Starvelarks Wood but all the heather you can see in the next picture will be in bloom at some point fairly soon. The heather continues to spread. 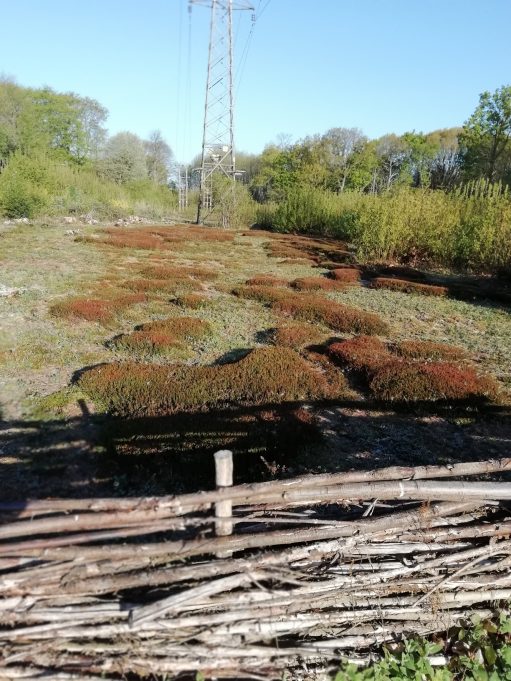 Here’s a photo from August last year from the same spot with all the heather in bloom. 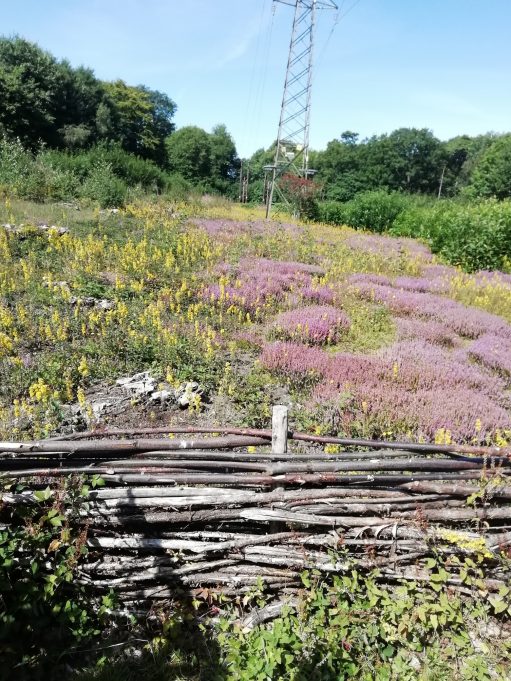 Starvelarks Wood was planted around 220 years ago as a sweet chestnut plantation although it is likely that at least part of the wood had been a wood long before that. The work parties have to keep the woodland on each side of the electricity lines clear and cut it regularly in a rotation system. Immediately under the lines an experiment has been going on for some years now. The trees have been gradually and deliberately uprooted. The result is the appearance of several plants typical of acidic heathland (after all it is Daws HEATH) and our current warden, Steve, is often to be found on hands and knees inspecting the flora and keeping a close record. He has discovered many of these same species in other parts of Daws Heath including Valerie Wells Wood.

Last picture is on the long straight permissive path in Starvelarks at a junction of four paths. The nesting box is usually inhabited by blue tits. 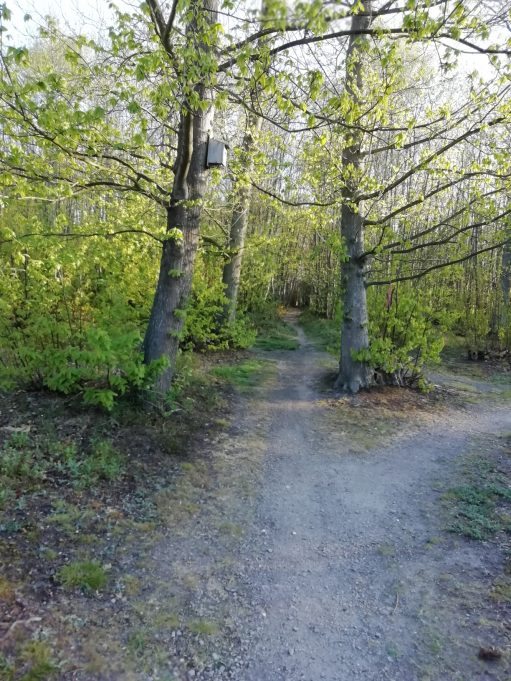