I moved from Hadleigh to Daws Heath 43 years ago and have spent a great deal of time learning about the history of this hamlet of Thundersley. I have heard about the bad old days, the coming of the Peculiar People, the 1930s developments, the more recent changes and the interesting characters who once inhabited the Heath. The local folk that I have met have always been generous with their time to talk to me and enlighten me about who, what, where and why.
A good number of those who have recently moved here have also shown great interest in the hamlet’s past. I have listened to stories galore, been lent photographs and other illustrations of Daws Heath for scanning and preservation and drunk a thousand cups of tea into the bargain. Of all the stories I have heard, the sad tale of Jessie Octavia Emson’s life is the one that has moved me most. 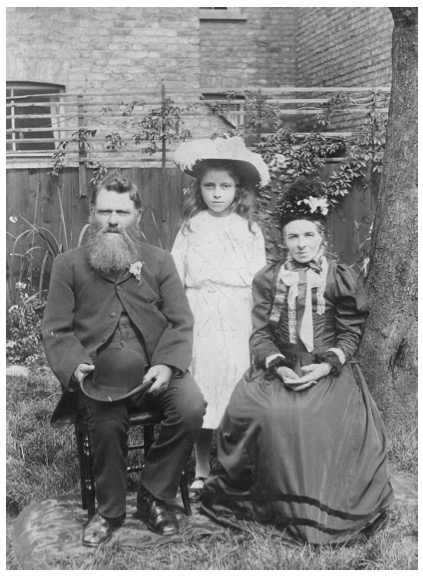 Jessie Emson between her parents, John & Emma Emson who were members of the Peculiar People at Daws Heath

For many years I would occasionally meet someone who asked if I heard about the “old girl” who lived in a tumbledown house and never spoke to anybody. Everyone could describe the old Western Road cottage she lived in but few remembered exactly where it stood. Most had never tried to speak to her and, if they did try, rarely received an answer. She wore scruffy down at heels clothes and apparently had little concern for her appearance. Inevitably, she was regarded as very odd, so much so that young girls and boys regarded her as a witch.

It was caring and sensitive Mary Howard who opened my eyes to the real Jessie Emson. Mary is a much respected figure in this neighbourhood and she has lived in Daws Heath for a good portion of her life. At one time Mary and her family lived as next door neighbours to Jessie so she got to know Jessie probably rather more than most people. Mary wrote a couple of pages about Jessie and unexpectedly handed them to me one day. Mary wanted the truth about Jessie to be known.

“As we understood Jessie’s history, she lived with her mother and father in their house. When they died she continued to live there. She had no running water or electricity. She was stone deaf. You could walk right up behind her and she would not hear you. You could make her jump.
We always waited until she was facing our way and when we needed to ask her a question would write it down clearly. She could read well.
We had to ask her about the ditch, the boundary between our two properties. She understood perfectly and answered with a few words. Being deaf her speech was probably difficult, but she made her answers clear and we found her a good neighbour.
She enjoyed watching our two sons, young at the time, as they played on their garden swing. When we had the Guy Fawkes bonfire and fireworks she watched with pleasure through the trees.”

The other account written by Mary about Jessie took a more poetic form, as follows:

“Old: she seems always to have been old, her life scarcely touching anyone else.
A house slowly falling apart and all the rooms but one, unused.
Wind: next day the need to climb the rickety, old, hand-made ladder to reach the roof to push back the tiles into place before the rain coming on the south west wind. Does she feel it in her bones the warning?
Herbs: grown in her wild garden. The need to gather and take in the box on pram wheels to the distant shop, prepared to pay coppers for them.
Boots, down at heel, left on the doorstep by who knows whom. Such independence! Layers of old clothes, all the warmth winter and summer.
Police, what do they want? A ride in the car to the court who require rates paying. They know from last year there’s no money.
Put her in a home – no, let her end her days in peace and privacy. She is not harming anyone or a burden.
The solitude of death should be preserved if that is what is wanted.”

Very recently my good friend, Roger Shinn, has described on facebook his encounters with Jessie when he was a child. He points out that Jesse not only sold her home grown herbs for pennies on a regular basis but at Christmas she gathered holly, mistletoe and ferns, presumably from the Daws Heath woodlands, and sold them in Hadleigh and Leigh. We also know from a variety of sources that she was habitually to be seen in an old black dress and a black broad brimmed hat pulled well down around her ears.

To add to the personal memories outlined above I have researched her origins which as we have noted were not generally known to those who met her. Her parents were John and Emma Emson who produced 14 children between 1868 and 1892 of whom Jessie was the fourteenth. Her father held down a variety of jobs including labourer, stockman on a farm, dealer, shopkeeper and poultry dealer. John was born in Wickford and Emma at Ingrave. Their children were born in Wickford, Eastwood, Rayleigh and Daws Heath. They all attended various schools and, in a time of high infant mortality, only two did not reach adulthood.

The most outrageous explanation for her behaviour came from a writer who was told that she was the daughter of white Russian 1917-18 émigrés and before she arrived in Daws Heath she lived with her son on a dilapidated, wrecked house-boat in Leigh. How this story came about we shall probably never know but I recently discovered that her grandfather, Joseph Emson, was a solid tiller of the soil born in Downham, Essex.

Unfortunately for Jesse, she was only 13 when her mother died and it would appear that she became her father’s housekeeper for twenty years until he died in 1925. The two of them are shown in the 1911 census as widowed poultry dealer and housekeeper respectively. From her father’s death onwards it appears she lived her solitary life showing no great desire to concern herself with those around her. Jessie died alone in her cottage in 1969 and many days passed before the police broke in and found her body. It seems she never asked for help – as Mary said, “Such independence!”

Published with thanks to Mary Howard for her contributions, and to Glynis Barnett for the picture.