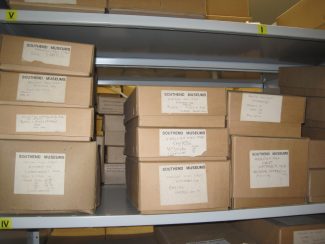 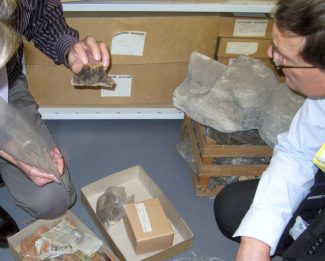 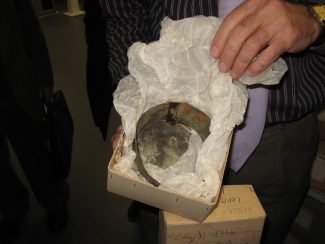 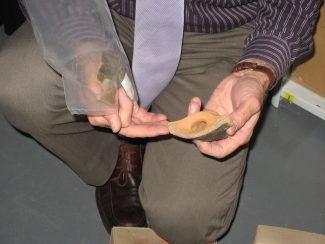 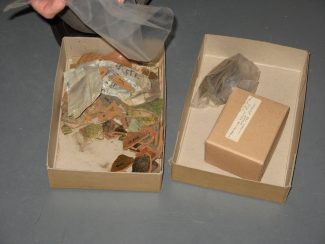 In November 2011, a group from the AGES Archaeological and Historical Association were invited by Southend Museum to visit “behind the scenes”.  Initially the visit was to see the collection of Roman pottery found at Canvey Point, but one of our eagle eyed members spotted some storage boxes labelled “Hadleigh High Street”.  The curator kindly allowed us to see the collection of artifacts and provided the report, a transcription of which is shown below.

“The excavations on the site of the recently demolished cottages, immediately south east of Hadleigh Church were far more successful than we had ever anticipated in terms of knowledge gained and material found, and provided not only evidence of human ocupation from the early medieval period to the present day, but also, and more unexpectedly, of a ditch and rampart defence of the tiny village area.

When work began it was known that cottages had occupied the site in 1799 and that close by was the turnpike road leading to Prittlewell, believed to have been wider than the present High Street.  Remains of these buildings, along with later additions and alterations were found, some lying over the line of a well-laid cambered surface, almost certainly the turnpike road.  This lay to the south of the site, i.e. to the north of the line of the present High Street.

Traces of earlier buildings had been partly destroyed by the sterile layer of the road, but there remained part of a building, with stone and brick foundations sufficiently intact to suggest a large west room of 16′ x 14′ with a further bay of 8′ to the east.  Although these measurments suggest the basic medieval plan no date of construction can be suggested at this stage, though the building was of, or earlier than, the 16th century.  The house was probably timber framed with a tiled roof and contained a hearth of vertically placed tiles.

On the west there was evidence of at least five earlier buildings, one of these forming some kind of industrial workshop.  This was shown by an interesting, half-egg shaped oven, providing a heated surface.  Further research and an analysis of the samples of embers taken will be required before the form of industry carried on can be suggested.

The continuous use of the site is shown by the fact of 16 layers of human occupation or activity, but whilst the traces of buildings were interesting in themselves they contained little to indicate their precise use of the area.

The layers beneath the buildings were far more informative, revealing the existence of a ditch and bank.  The ditch, which was some three feet deep, three feet wide at the base and with steeply sloping sides, had provided ballast to form a bank on the north (or inner side, towards the church) which could be traced for thirteen feet to a height (in its present eroded state) of more than one foot.

It was the silting and gradual filling of this ditch which provided a valuable series of pottery sherds, provisionally dated to the 12th-14th centuries.  A surprisingly large proportion of these were glazed sherds from jugs (suggesting a substantial household on, or adjacent to, the site) but some of the coarser cooking pots were also found.  From the ditch came other interesting objects, including the shed antler of a red deer.

Even earlier occupation of the site is suggested by the fact that the rampart, at its northern end, covered and embraced an earlier mound of gravel in which was a human burial, which is provisionally dated, by the evidence of a fragment of iron pin, to the Early Iron Age;   further human bones were found in the ballast used to make the rampart.

The site has therefore provided abundant material evidence for the earlier history of Hadleigh, previously only traceable through documents.  It has however,done far more;  it has indicated that other villages of Saxon or Early Medieval origin may have, for investigation, similar small but effective lines of defence against animals and attackers.

The co-operation of some 30 volunteer diggers; of the Benfleet and Southend-on-Sea Councils; and others concerned, is acknowledged and will be dealt with in greater detail in the full report to be prepared.

Whilst we are confident of the broad datings given above, some amendment may be forthcoming when the pottery finds, etc. have been washed and examined in detail.”

Sadly the final report appears to have been lost or never completed.  If any of our readers know otherwise, the Archive would be grateful for any information.

Here are some pictures of the “dig” in progress.