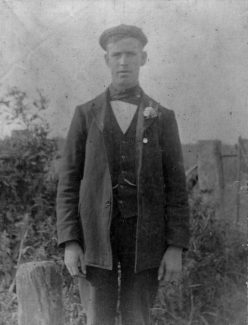 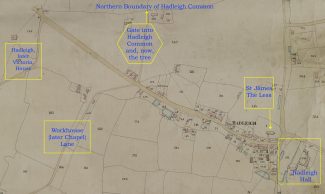 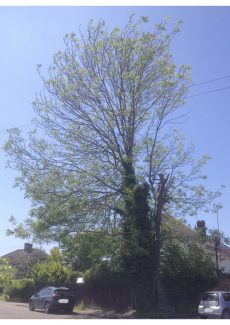 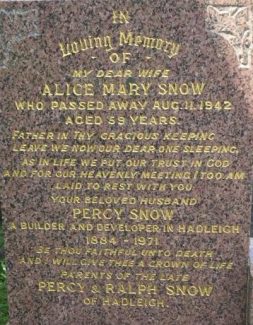 Here is a picture including part of the gate that once stood across Commonhall Lane and divided Hadleigh Common from the farm’s premises.

Standing in front of the gate is Percy Snow (1884-1971), representing the third generation of the Snow family of Hadleigh.
His grandfather, Henry, came from Eastwood.
Percy was Bob Delderfield’s first informant about the late nineteenth and early 20th century Hadleigh and Bob acquired the photo about 1969.

You can find where this historic feature once stood by walking north along Commonhall Lane from the junction with New Road, keeping to the left hand side of the road until you pass Hall Crescent.
Now look on your left for the back fence line of the houses in Hall Crescent which delineates where the boundary of Hadleigh Common once lay.  “It’s not much but it is history.”

Hadleigh Common once covered 42 acres, stretching from Victoria House Corner to Rectory Road.
In 1852 the Common was enclosed.
The ancient rights of the villagers disappeared overnight and a paltry five acres was left for public use.

In December 1853, the lady of the manor, Lady Olivia Sparrow, was awarded former common land when it was enclosed.

She donated a plot of former common land on the village’s main street for the new school, the site of the present Sandcastles Nursery.  Another article describes more about the school.

The event is described in more detail in the article  called “Remnants of Hadleigh Common.”

We are also fortunate to have the 1847 Tithe Map of Hadleigh and more detailed information on ownership and use of the dwellings and areas marked thereon.

The grave of Percy Snow is in the churchyard of St James The Less  and even today (June 2021) there remains a physical marker of the northern boundary of what was once Hadleigh Common; it is this tree in Commonhall Lane.  Long may it continue!

If you are walking north along Commonhall Lane, your next turn to the left is Arcadian Gardens.

This is one of the articles about that road.

In conversation with Bob Delderfield