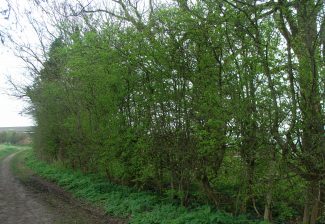 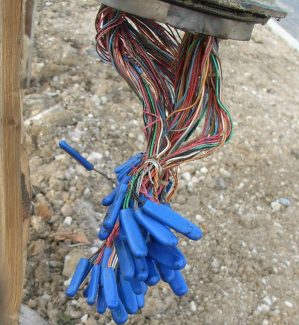 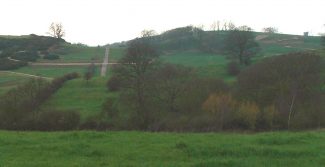 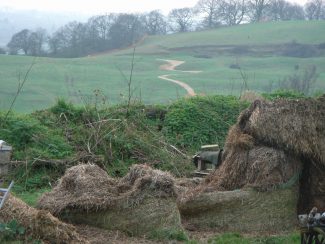 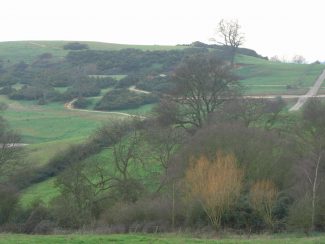 The linking theme here is green, chiefly of nature’s fresh ‘Green Screen’ of spring captured today, 20th March 2011.
We started out in sunshine intending to photograph the footpath and the distant trails of the 2012 Olympic Mountain Biking Course.
Even the telephone connections in Castle Lane have some green wires, and symbolise the thousands of people who will make a connection with this area, both the 5,000 in the trial event this year and the 10,000 people expected in August 2012.

From most road maps, one might expect Fitzwilliam Road to join Castle Lane to Chapel Lane. But there is no road as such, just a rough track of almost-dry mud and grass (visible in the picture) where today’s picture of the Green Screen was taken.

The track runs just at the southern limit of ploughed farmland and ditch from the stile at Seaview Terrace roughly westward to end by the strange drainage pond at Chapel Lane.
In March 2011, a metal quarter-radius gate allowed us to skirt a very muddy farm track (Piggery Lane, made invisible from the air by tree branches forming a tunnel, parallels the drier track at this point) and then walk onto the farmland, roughly where the marker is on the map, below.

To the east were cows and calves in the barn, with a bull, and all were silent.
The barn was generously surrounded by the usual huge scrolls of straw, some coated in black plastic and some with grass starting to sprout.   Above were frequent seagull calls, and a twin-engined plane being tested out of Southend Airport.

Trains hummed past, around three quarters of a mile to the south, and from Canvey came the distant chimes of an ice-cream van.
The views of the track and the misty “hills” were westward and, as you can see, we were not troubled by too much sunshine.    The whole area breathed an amiable combination of meadow, straw, greening trees and farmland gathering organic strength for the growing season.
Matching this mixture of scents was the broad palette of greens, as grassy meadows westward of the farm descended past trees, bushes and hedgerows before rising erratically to support the twists and turns of the Mountain Bike course.