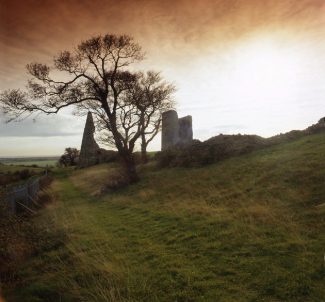 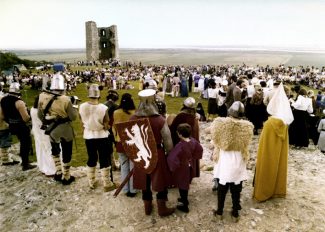 Congratulations for getting the Hadleigh and Thundersley Archive up and running. I for one am looking forward to learn a lot more about the area and the people.

Our house was a hundred years old last year (2010) and it was the first in this setting. We can see the castle which once was part of the dowry of several Queens. Castle Lane used to mark the western edge of Hadleigh’s Royal Park with its ditch, bank and pale, so very likely people would travel down that ditch, which filled in and became a lane. The Kentish stones for Hadleigh’s church would have been laboriously brought up that way from the river even a hundred years before the castle was built.

They have more modern instruments now and there are fewer ships anyway, but we used to hear the boom of ships’ horns testing the distance to the riverbanks and to other ships when autumn mists roll up from the Thames.

Landscape retreats into nothing but distance.
Cobwebs hang heavy with dew.
Crystal-clear droplets like beads on a necklet.
Fog shrouds the castle from view.

Pigeon at rest in its oak tree perch morning,
Treetops nod gently, like reeds.
Muted the drone of a riverboat’s warning.
Sound, like the ebb-tide, recedes.

Rattling, a ghost train rolls by on the marshes.
Ghost ships pass close to the shore.
Calves, half asleep, graze the Downs’ Sally Army.
Kings ride in splendour of yore.

Just for a moment the retinue lingers.
Queens find their home of a kind.
Over your spine travel icy-damp fingers.
Footsteps – or hooves – in the mind?