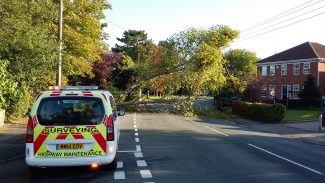 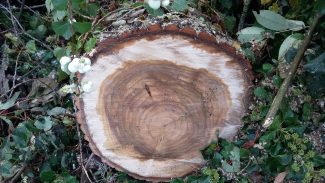 During the early hours of 13 September 2017, a silver birch was blown over in predicted 55 to 65 mph winds from the edge of John Burrows Park, not far from the entrance road into the park, and finished up across the power wires on the other side of the road. Local residents were very lucky that it did not lead to a power cut, although the road was blocked for several hours.

After felling, the tree diameter was measured to be 50cm, equivalent to a circumference of 1.5m. It was possible to count approximately 25 growth rings, each about 1cm wide ie the tree was 25 years old. [Click on the pictures to enlarge them.]

From the distance it fell, covering the whole road, it is estimated that the tree was about 50 feet high, a height consistent with a 25 year old tree.

Silver birches mature at 40 years and rarely survive 50, but this one only lived until middle age thanks to the storm.