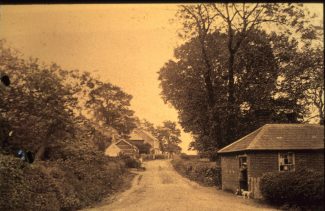 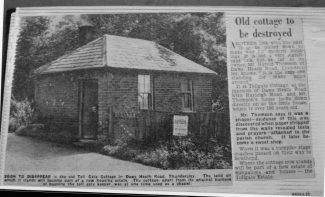 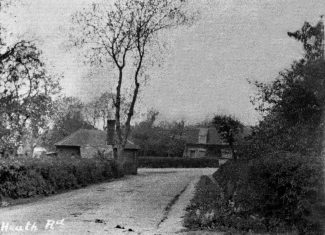 zoom
Thundersley Toll-cottage on the left, the junction is the Wantz viewed from Daws Heath Road. Straight ahead are Kiln Farm Cottages.
Derek Barber collection 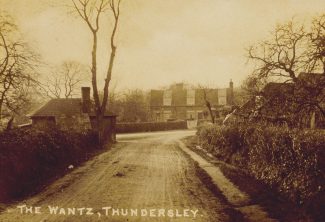 zoom
View of the Wantz from Daws Heath Road with the Tollhouse on the left. Straight ahead are Kiln Farm Cottages.
H&TCA
Where Thundersley Toll Cottage used to stand

In 1555 an Act of Parliament was passed making individual parishes responsible for the upkeep of the roads within their boundaries.  Parishioners were obliged to work four days each year to maintain these roads in good condition.  A parish surveyor was elected every year to supervise this, and the materials were obtained by raising a charge on the more prosperous parishioners.
This worked well when the roads were used only by pedestrians or those on horseback, but by the 1700s much heavier traffic was damaging the road surfaces.  Wheeled carts would make ruts which filled with water in winter or baked hard in summer.
The damage was also caused by through traffic that wasn’t liable for the repairs.  The roads were described as “being in a ruinous condition, narrow and incommodious and cannot be effectively amended, widened and kept in repair by the ordinary course of action” (Seax S3002).

The Session Rolls of Michaelmas 1598 state that “we present a gateway in Hadleigh parish which is an annoyance to the country, to Rochford market, and is to be mended by the town of Hadleigh.” (Seax Q/SR 143/33.)
In 1615 five Hadleigh men were found guilty of failing to put in their allotted time or to give the use of their carts for road repairing.

The residents of Thundersley didn’t fare much better.  In 1677 a complaint was laid against “the inhabitants of Thundersley for not repairing the highway from Hadleigh Common to Rayleigh, containing half a mile in length”.(Seax Q/SR 435/34.)

As a result, in 1747 the Rochford Hundred Branch of the Essex Turnpike Trust came into existance.  It was made up of 42 acting trustees and covered the roads from Shenfield via Rayleigh to Rochford (21 miles) and from Rayleigh to Leigh via Hadleigh (5 miles). Toll gates were set up at strategic points and through traffic would pay a toll to proceed through the gates.
The Trust was non-profit making and unlike the Dartford Crossing of today, proceeds were used purely for the upkeep of the turnpike roads.
The Turnpike Acts left the number and position of the toll-gates to the trustees who had local knowledge of the most used cross roads that would intercept the maximum number of travellers.

The first Hadleigh toll-gate was set up at Four Wontz Ways (Victoria House Corner), one gate covering the Rayleigh to Hadleigh road and one gate for the London road, this produced such an income that the Trust were able to finance the repairs without the need to borrow against future income.

The High Street from Four Wontz Ways to Leigh was known as the Turnpike Road and according to an archaeological excavation in 1968 was found to be wider than the current High Street.

In 1851 the Thundersley toll collector was twenty-eight year old Peter Smith who was born in Royden, Suffolk.  With him was his wife Sophia from Saffron Walden.
What brought them to Thundersley?  Was it the job?
The toll-cottage  became known as Sidegate Cottage and wasn’t demolished until 1966. In 1861 the collector was fifty year old Henry Burton.  Interestingly in 1871 he is recorded as being a Beer House Keeper at the Woodcutters Beer House.

The Thundersley Side Gate became so successful that by the 1830s the Hadleigh Gate was only needed to control the through traffic from what is now the A13 from South Benfleet.  Accordingly the Hadleigh Gate was moved east to a new site along the London Road in Leigh, the only reminder of which is “The Turnpike” off-licence, opposite Eastwood Road.

By the 19th century, almost all major crossroads had been brought under turnpike trusts; the turnpike roads being the foundation of today’s modern trunk roads.