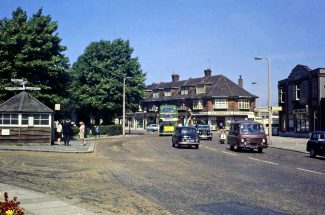 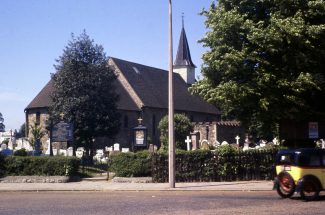 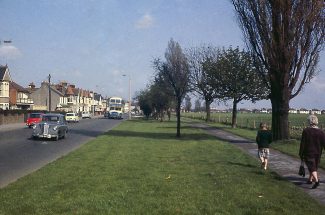 The first is of Hadleigh Church bus stop. Traffic certainly was not such a problem then.  We see London Road in Hadleigh Town centre which was then a two-way road; as was the High Street, to the left of the bus stop at Hadleigh Church.

The road signs atop the shelter indicate Salvation Army Citadel, Daws Heath Road and High Street. The green bus heading west was an Eastern National 25A, which I think may have been turning right into Rectory Road.

The second picture shows an old car (Austin 7 maybe??) travelling past the church in a westward direction.

The third photo shows a view east along London Road by the Salvation Army fields.  A Southend Transport No. 1 bus is heading towards Hadleigh on its way to Rayleigh. Does anybody know who the lady and young girl are? Or maybe what school uniform the girl is wearing?  Some years later the houses on the immediate left of this picture were demolished to make way for a development of flats. An event which has been repeated many times in Hadleigh over the years.  Finally, the lovely green area between Hadleigh and the Leigh boundary could have been a bus-lane now, if the planners had had their way. Thank goodness that didn’t happen, as this is the only ‘oasis’ between Hadleigh and Southend.