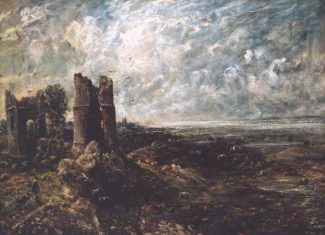 zoom
Oil sketch; Hadleigh Castle, The Mouth of the Thames - Morning After a Stormy Night
Oil sketch at Tate Britain 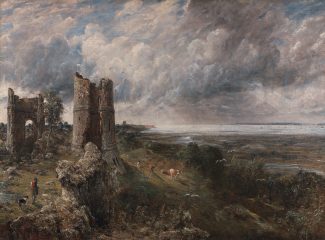 John Constable (1776~1837) was one of the major English landscape painters of the 19th century. He is best known for his paintings of the English countryside and, in 1814, he visited Hadleigh Castle and made a small drawing of the ruins. The drawing is now in the V&A and a brief article about it is available here.
In the 1820s, he used this drawing as preparation for ten oil sketches (one of which is owned by Tate Britain and is the first picture on the right) and a single painting.

The 1829 painting is the second picture on the right; it is a 4 feet by 5 feet (approx) dramatic rendering of  ‘Hadleigh Castle, The Mouth of the Thames – Morning After a Stormy Night’  now at the Yale Center for British Art at Yale University.

Constable made full-size sketches like those of Hadleigh Castle for many of his paintings, as they allowed him to explore his ideas before committing them to the final canvas. The finished picture in this case was exhibited  at the Royal Academy in 1829. As an image of loneliness and decay, the painting reflects his desolate state of mind at this time, due to the death of his wife.

There is a detailed description of the painting and recommended facilities for much closer examination of the canvas itself available in this part of the catalogue in the Yale Centre for British Art.

Brief summary of the Yale Center’s catalogue entry:
{Here is Constable’s description of Hadleigh Castle in a letter to his wife, Maria, about “a ruin of a castle which from its situation is really a fine place—it commands a view of the Kent hills, the Nore and the North Foreland & looking many miles to sea.”

Hadleigh Castle in 1829 comes relatively late in the sequence of John Constable six-foot canvases and the Yale Center speculates that this rendering may have been prompted by the death from tuberculosis of his beloved wife in November 1828, perhaps also by his election in February 1829 to full membership of the Royal Academy.

Constable’s enhanced status as an “RA” would have raised expectations, and this version of “Hadleigh Castle” both dwells on the decay of the medieval building in its pastoral setting and causes the Thames estuary to shine under grand shafts of light.}

[Ed:  clicking the magnify button on the image of the painting allows the reader to scroll across the picture to reveal more detail.   Even higher resolution is available using the links to the Yale Center for British Art.]