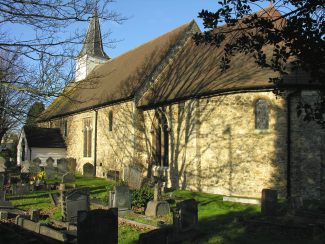 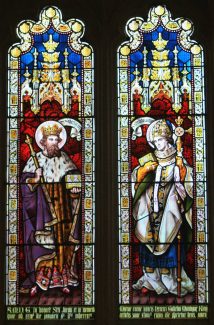 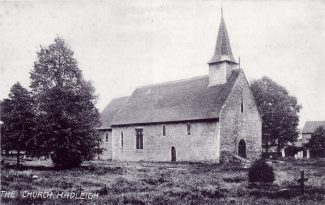 St. James was believed to have been built by the Normans around 1140, but recent thought suggests that this may not be the case.  On the wall by the north door is a Saxon elf charm ‘to stop the Devil from returning after baptisms’.  The size of the main part of the church corresponds with that of the Saxon church of St Peters at Bradwell. The Normans sometimes extended or altered existing Saxon churches where these were built of stone and this may be the case at St James as the rounded apse is typically Norman.

So, Hadleigh is not only blessed with a wonderful old church but possibly a rare Saxon place of worship.  It even contains a stained glass window showing a king of the East Saxons.

One of the many beautiful stained glass windows in St. James the Less is on the south side of the chancel and depicts a king and a bishop. Saebert was a pagan king of Essex who became a Christian and was probably baptised by St Mellitus. King Saebert certainly helped St Cedd establish St Paul’s in London (then a wooden building). The King died in 617, two years before St. Mellitus became Archbishop of Canterbury.  Tradition has always maintained that Saebert is buried in Westminster Abbey but it now seems more likely that his burial place was close to Prittlewell Priory.

The churchyard is at least Saxon and is full of fascinating details.  When the Salvation Army arrived in Hadleigh in 1890, they were not allowed to bury their dead on unconsecrated ground and it was agreed that the south east corner of the churchyard should be reserved for them.  Later burials are in other parts of the graveyard.  In the 19th century, other churches were established and these too were only allowed to have burials at the Parish churchyard excepting the Peculiar People of the Daws Heath chapel.

There are many interesting gravestones; one shows that Elizabeth, the wife of Commissioner Smith, was a missionary to the Zulu people and another two belong to men who fought in the Crimea War.  Several on the south side of the church are members of the Wood family who provided some of the church’s stained glass windows. They were active members of the church, local landowners and lived at Solby’s House during the 19th century.  There is the grave of the old lady, whose ghost has wandered to local buildings for many years.

Then there is the grave of Hadleigh’s White Wizard, Cunning Murrell …!

At present the gravestones at St James are being transcribed for the Essex Record Office.