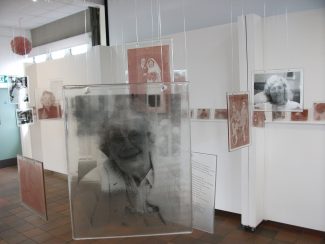 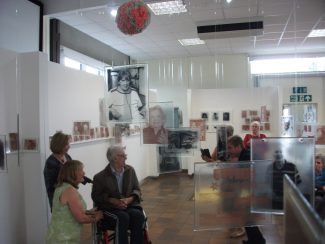 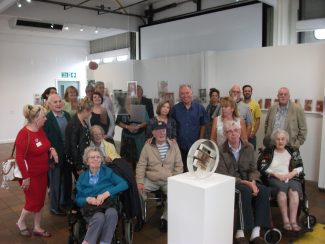 There was a special day on Wednesday 4th September 2014 when some of the residents of Elizabeth House visited the Hadleigh Old Fire Station to see the display of photos which included their own portraits along with stories from their lives and from the lives of older relatives of some of the pupils from King John School.

This was just one of the works on show in the exhibition titled “Traces”, running from 1st to 14th September, by 6 pairs of local ENAS (Essex Network of Artists’ Studios) artists.

Karen Murphy and Rhoda Webb had created, amongst other parts of their display, a hanging of photographs on glass and the press turned up to photograph the “models” with their exhibited images.

I, for one, found this to be an intriguing mix of personal stories and artistic interpretation, the character brought out in the photographs being reflected in the wealth of special memories. Everyone present seemed very pleased with the eventual outcome and proud of the part they had played in the production of such a work of art.