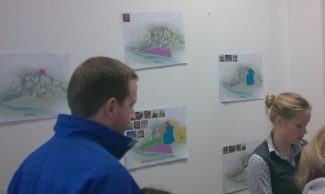 zoom
Close attention to the proposals

People picked up their copies of the Hadleigh Farm Legacy Consultation Feedback Form and were encouraged to comment regarding the individual zones in the proposal,  some of which are visible behind Barbara Mills in the picture.

The zones include Zone 2: Mountain bike and cycling trails,  and Zone 4 — grassland restoration;  and proposals for better visitor facilities at the Chapel Lane Country Park. Suggestions had included the possibility of free parking at the Chapel Lane car park, but Barbara explained that other equivalent sites had attained financial sustainability through continued use of parking charges.

The next events organised are walking tours (17th March) of the different zones and distribution of a questionnaire about the historical and natural heritage at Hadleigh Farm and the Hadleigh Country Park.