The History of Sayers Farm 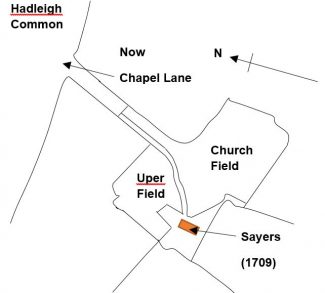 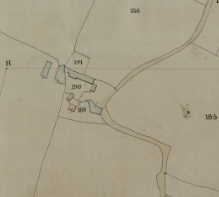 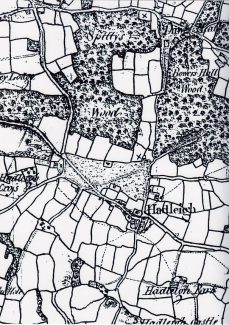 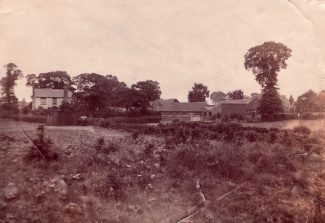 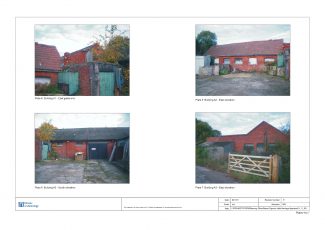 As one of the few remaining old buildings in Hadleigh, Sayers Farm House is of historical importance and farmsteads have existed there for many centuries.

More recently, Tracey Longcroft (was Bull) has told us that she lived at Sayers Farm House with her family from about 1971. Her father was the dairyman and also started and ran the colony lakes fishing club.
He lived in the farmhouse until two years ago when sadly he passed away. They were the last family to live there. Since her father died, the house has been empty.

Before the Bulls lived at Sayers, Mr Mapes, also the dairy farmer for the colony, lived there. In 1972, Mr Mapes said that that the rear of the house had been a crumbling, probably “very old”, tarred wood structure that, by that time, had been removed and replaced with a brick extension.
It is estimated that the present house was built in the 19th century, but a farm stood on the site in earlier times.
When digging a pit for milking sheds some very old timbers had been unearthed, probably of a much earlier building.

One field is still known as Snipes Field but more usually called Sewer Field, owing to army activity in the field during world war two.
A brick industry existed up to about 10 years ago. The former quarry to the south west of the house is where Prittlewell Fishing Club have fishing rights.
[This is the quarry beside which the footpath from Benfleet Road passes.]

Some of the earlier history of Sayers is known and the estate plan from 1709 provides some interesting names for the farm fields and surrounding land, but the house is thought to be potentially a lot older.

Over the centuries, the farm was known as Sawyers, Adgones and Stockwoods. During the 16th century it was owned by the Kirton family. (Hancock and Harvey, 1996).

As part of the redevelopment of the area after the 2012 Olympics, a few archaeological trenches were dug in 2014 including about 300 metres to the north of the house.
The report by Oxford Archaeology East also gave a great deal of background information about Sayers, including a copy of the 1709 estate map and an extract from the tithe map of 1847.

In 1706, Sayers was owned by  Mr Samuel Micklewright in the possession of the Widow Hurst. At that time it comprised:

The report for the 2012 Olympics said that Romano-British building debris was found in a drainage ditch immediately to the south east of the site, maybe the earliest evidence for a farmstead in the area.
It also said that the house is probably the site of a medieval farmstead and may relate to William Sayer who is recorded in 1491. By 1709, the farm covered 137 acres, much larger than that required to support a medieval family. It is thought that following the Black Death and other plague outbreaks, a number of farmsteads may have been amalgamated to one of this larger size.

In earlier times, parts of Sayers Farm were not good agriculture lands due to the slopes and the,  then, undrained marshes, but overall Sayers was of a size to support two farmsteads and it is suggested that Sayers may have been the site of a small hamlet.
At one time it was owned by the Strangman family (Yearsley, 1998).

In 1847, the surrounding farmland was owned by James Patten and Sayers was occupied under a 21 year lease (at  a rent of £ 82.10s per annum) and farmed by brothers John and Daniel Woodard.

At about this time, a well or spring somewhere on the farm was used as a source of mineral water, quite probably bottled by the Essex Mineral Water Company Hadleigh Essex . At least one bottle bearing this logo has been found. However, the Woodard brothers were aware that the water from the spring had a purgative effect if drunk by their horses, so it may not have been a big seller to people looking for a cure, unless it was for constipation!

Daniel Woodard died in 1850. In 1854, Edward Woodard of Billericay bought the farm at public auction for £ 550 (deposit £110). It then comprised  a residence with outbuildings & 127 acres of arable and pasture lands.
In 1851, John Woodard was living at Sayers with his blind unmarried sister, Elizabeth, with two servants: Mary Blakeley and Arthur Robinson, a young 18 year old labourer.

In 1861, Elizabeth, by then 62, was on her own at the farm, but joined at that time by her sister, Jane. They were looked after by two servants (Mary, by then 52, and 17 year old Eliza). Two agricultural labourers, James Adams and John Meen, were lodging with them.

By 1881, widower, Robert Clarke, lived at Sayers as the farm bailiff, with his three young children and a domestic housekeeper. His elder daughter, Hortence, 13, was employed as a general domestic servant.
By 1891, the Clarkes had moved on to be replaced by John and Eliza Wright with their two children, with John as farm bailiff and their son, John, 16, working as a farm labourer. George Neil from Thundersley, only 14,  boarded with them as a farm labourer.

In 1891, Sayers was one of a number of Hadleigh farms purchased by the Salvation Army to use for its Colony, with the area immediately to the south of Sayers being the centre of their brick-making industry. { See  Salvation Army Land and property purchases}
By 1901, the Salvation Army had installed Thomas Emson as Farm Manager and he lived at Sayers with his wife, Edith, and their two young daughters,  Maud and Edith.

By 1911, Frank Moody lived at Sayers with his wife, Elizabeth, and had become the Dairy Manager.
The majority of pottery recovered in 2014 by archaeologists from the trenches to the north of the farm was provisionally dated to be between the 11th and 13th century and relate to an early farm complex in the immediate area of Sayers Farm.

Records of pottery finds made by the Salvation Army in 1936 during their digging for brickearth take the history back even earlier, to the Iron Age, about 2,500 years ago. The finding of whole pots from that time indicates that they may have been used to hold cremations as part of a burial site of Iron Age farmers once living in the nearby area.

More historical information about the area can be found in:

[I am most grateful for the information passed to me by others, especially Bob Delderfield, and for the use of the images which already appear on other articles within this archive. However, if any former residents of Sayers have any more images that they wish me to add to this article, please send them by e-mail to admin@hadleighhistory.org.uk ]