Down with the old... 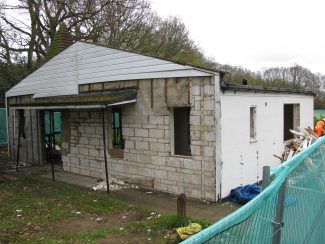 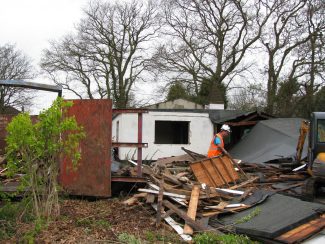 Today, Monday 23rd April 2012, the building that has served countless families since its arrival and erection on St Michael’s field in 1921 was demolished.

The building was initially used as a hall but soon began holding services for the people of Daws Heath who found it a long trek to the parish church on the hill in Thundersley.

Generations of children passed through the church’s doors taking part in various forms of activities, other than church attendance. Some of those children, even from earliest times, continued to live in the area and their own off-spring have continued the tradition. Some of the current congregation have known the building, and many of the changes that took place to it, all their lives.

At the end of the day, a building is not the church. The church is a body of people… So, a little under three years ago it was decided that we needed a new building. It had been said as much, several years earlier to many cries of woe, but a light shines over Daws Heath, with its welcoming and friendly ethos, and after a concerted period of thought and prayer the decision was made by the congregation to build a new church. We planned to achieve this during the year of Her Majesty’s Diamond Jubilee.

Daunting as fund raising was, that has been achieved, well nearly, so too has the demolition. The new building is currently under construction in Lapland: the fund raising leader has been out to see it and it arrives in June.