The Village Pub run by the Francis Family for 125 years 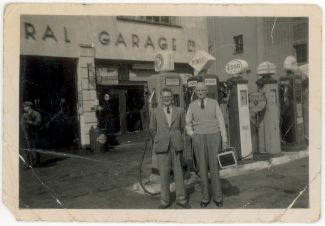 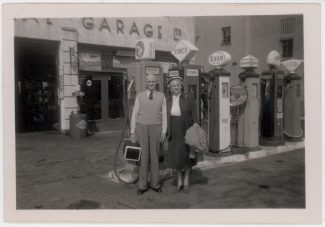 zoom
Husband and wife, Sid and Mary Francis in about 1960 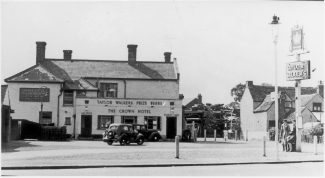 zoom
The Crown in about 1949. Note the west-bound bus stop and Reynolds' scrap yard, the other side of the High Street. The new Reading Library was later to replace the old cottages
Joyce Bardell Collection 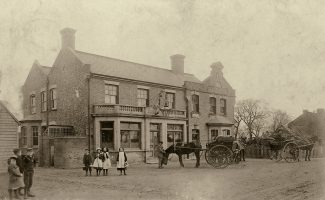 zoom
The Crown Hotel, pictured at around the early years of the 20th Century.
(Public domain) 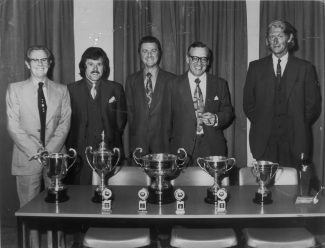 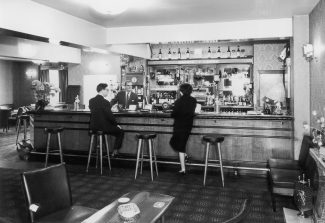 zoom
Jack Bardell behind the Crown bar, in 1965

Hadleigh & Thundersley Community Archive was entrusted with a small collection of photographic memorabillia, when Joyce Bardell, late of the Crown Hotel, Hadleigh, died. The package included three hand-written sheets of autobiography by Joyce, the text of which I append below, verbatim.

I was lucky to be born into a wonderful family, namely the Francis family. My Grandparents Mr & Mrs James Francis who took the “Crown Hotel” as it was known then. They and their family came to Hadleigh, but the Crown wasn’t actually finished, so they put most of the children up in the village and my Grandparents had a tent on the lawn. So, over the years and through two World Wars.

Their eldest daughter Mabel helped run the bar etc the two older sons went to London they were both very clever artists, oil paintings, unfortunately they both died very young. My Father Sid Francis joined Royal Flying Corps in 1916. The Pub was still going with my Aunt and a Potman and my Grandparents.

It was a busy pub for a small village. My Dad married a local Farmers daughter Mary Lincoln after the World War (1st War) and continue to run the Pub. My dad was an engineer when the War was over he went back to work for Holmes & Smith, Westcliff bus Co. They had a daughter, Joyce, she went to St Michaels School in Hadleigh Road, Leigh. As time went on Joyce married Jack Bardell he was a motor engineer who worked for Sid Francis (he had a motor garage) at the Crown.

A lot went on in the Hadleigh Pub, they had Pigeon Club, Motor Cycle Club, Dart Club, a club called the Diddlem Club, which was a big Xmas money club. We belonged to the Rochford Hundred which was for the Licensees of Essex Rochford Hundred area pubs.

The Crown has been a wonderful house – no trouble, when we had it as a family 125 years it seems a shame that the land on which the Crown stands is going to be another supermarket surely we have enough as they already cause the closure of our individual shops after all they were part of English life.

We ran the Castle Point Bars and we at the time of dinners etc we employed 12 extra staff and also 8 persons at the Crown. It was a Pub much admired it is a lovely old Victorian building and as I am the last person with my husband to hold the Francis family Licence of the Crown for 125 years. [Taylor Walkers. Ind Coope]

Hadleigh has so much to see, what with the Castle and its wonderful history and the walks to Leigh. We had an Irish cook to come and work for us, but she left, she said the Crown was haunted, but it is a good ghost – I know. We had water from a stream. I had to pump it up, there are two wells in the grounds. [notes end]

Nowadays (Feb 2016) the Crown Pub stands forlorn and derelict, since the Borough Council bought it in 2011. The initial grandiose plan was to incorporate it into the new Regeneration Plan for Hadleigh as “The Jewel in Hadleigh’s Crown”, perhaps as a Restaurant or Arthouse Cinema, but money was tight and a suitable developer could not be found willing to take this forward. Currently (2016, and still true in late 2017), the intention is to demolish it (along with the Library) and build a new Library, Community Space and Artists’ Studios.