At the Hadleigh Fair in the Rectory grounds in June 2015 AGES, our local archaeological group, were excavating a metre square test pit. Suddenly there was some excitement. A carefully laid line of four bricks had been revealed and immediately theories were banded about, some serious and others more fanciful.  For the official details of the “dig” and the bricks you will have to read the new article by Terry Barclay: Community Dig at 2015 Hadleigh Fair.

The appearance of the bricks caused me to recall the well known picture of the earlier Victorian rectory with its front garden and driveway. Was there some evidence in the picture which could throw light on the bricks? A quick look at the picture in a handy copy of Hadleigh Postcard Memories suggested a negative response to the question. 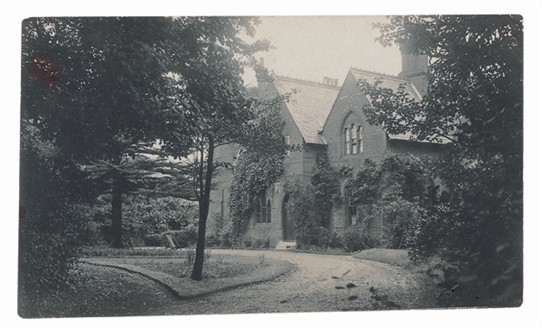 During the very successful and splendid fair many people visited the excavation and I had discussions about the history of the rectory with several of them. These included the Rev. David Childs, the current resident Rector. Another interested party was Sandra Harvey, one of the co-authors of Hadleigh: An Essex Village [Phillimore 1986]. All of us were uncertain of the exact position of the Victorian rectory except that it was larger than the current building and probably stood slightly forward of it. It fell into disuse in 1933 and although discussion took place in 1939 with regard to building a new rectory, it took another 14 years for it to arrive. Robert Nichols, author of Hadleigh Postcard Memories, was present at the fair and told me he remembered the Victorian rectory as a forbidding dark building which he as a child found rather frightening. In those days there were many more trees in the front garden. Other locals, slightly younger than Robert, remember walking and playing in the Victorian ruins.

Ruins and rectory were two words that rung another bell. When Rev. Thomas Espin arrived in Hadleigh in 1853 to take up his new post as Rector, he found the old rectory in a ruinous and parlous state. [see also The Fall and Rise of Hadleigh Rectory] He soon set to and by 1856 had built a new one, the one we now refer to as the Victorian rectory. I made a decision whilst the fair was in progress that the exact positions of the two previous rectories must be discovered so we could visualise them in relation to the current house. For many years now, having looked at maps from different periods, I had vizualised in my mind that the 1856 rectory stood very close to the current one and that the pre-1856 had stood some distance behind both. Within half an hour of the closure of the fair I knew I was wrong in my previous ideas. I comfort myself in that I was not alone in my error.

After the fete, David Hurrell, one of my fellow editors, assisted me in returning books and equipment to our office in the old fire station. Upon discussing the rectory problem with him he immediately started up his computer and showed me the overlays of various maps of Hadleigh. An overlay, for the uninitiated, is simply laying one map over another one of a different date. If you have the necessary software this is not a difficult process.

A map of 1895 showing the Victorian rectory was placed over a 1990 map. Shock! Horror! The 1856 building was not in front of the current one but behind it. Half the building was in the back garden of the current rectory and the other half stretching across the width of Rectory Close. Then when the 1847 Tithe map was laid on top of the others it showed, as I had suspected, that the oldest rectory of the three was indeed sited well behind and to the east of the current one. It was a surprise, however, to discover just how far back from Rectory Road it stood and with no apparent path or road linking it to that road and the Common.

The illustration below shows the positions of the three rectories but how did it come about that each rectory was placed some distance from the previous one? The answer to that is glebe land. The term “glebe land” refers to land which came with the benefice whereby successive parish vicars or rectors used it to derive some income by farming it themselves or by leasing it out. Glebe acreage varied from village to village, from a humble acre or two to a sizeable glebe farm. The land would have been acquired over the centuries through grants by the Lord of the Manor or by donations. In Hadleigh the glebe amounted to nearly 70 acres but was split into three distinct parts: about 33 acres to the east of Chapel Lane,  about 35 acres well down Scrub Lane towards the Leigh boundary and a one and a half acre plot in Rectory Road. Thus it was possible for the Rector to select a place within the boundaries of the one and half acres to site a new rectory. The illustration of the position of the rectories also shows the extent of the glebe in Rectory Road. 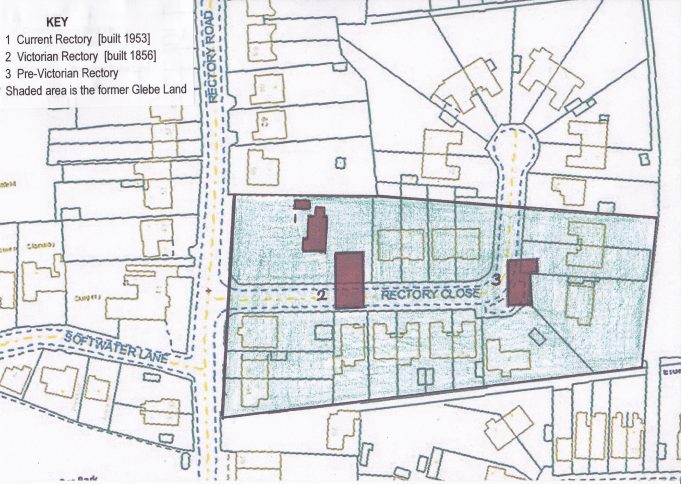 The Glebe Land and the Three Rectories