The Population Growth of Thundersley Parish 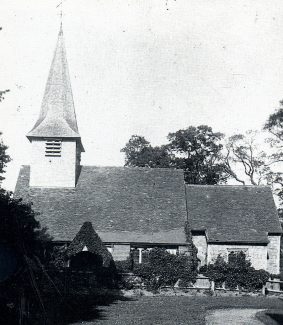 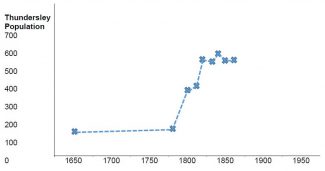 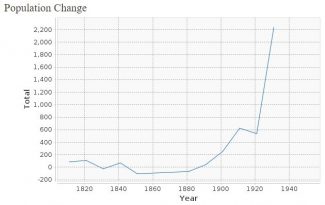 Thanks to the national census results from 1841, much has been known for many years about the large expansion of the population of Thundersley in Victorian times.

The earliest estimate of the population can be made from the Domesday survey of 1086. Thundersley was then a reasonably sized village compared with others in the area, probably partly because its Lord of the Manor was Swein, living at his castle in Rayleigh.

The village then comprised 12 households: 5 villagers,  5 smallholders and 2 slaves. They provided between them the labour required to make use of the 2 village ploughteams and the 2 teams belonging to Swein. Each plough would be steered by one man with another leading the team of oxen.

The estimated household size at that time is between 4 and 5, giving a total in 1086 of between 42 and 52 Thundersley residents.

Recent research of the parish records by Maureen Lennard-Brown, on behalf of AGES Archaeological and Historical Association has enabled a statistical estimate of the post medieval populations to be made from applying the likely birth rate to the number of baptisms recorded for each year.

Applying a formula developed by François Lebrun in 1990, it has been estimated, using the number of baptisms over a 40 year period, that the population of Thundersley in 1665 was 135 and had only risen slightly to 148 by 1785.   Around those periods, the population appears to have gone up and down from year to year, perhaps with infectious disease epidemics;
especially affecting the youngest children. Sadly, it was not unusual for families to have to bury a number of children over a short period.

From recent test pit excavations co-ordinated by AGES, it is has been noted that there had not been widespread occupation of the parish before 1800, so the area may then have comprised only isolated farmsteads and hamlets. It is likely that the population rose significantly from 1785 due to improvements in nutrition and medical knowledge. Essentially, fewer children died at a young age and themselves lived long enough to raise their own families.

Pottery dating from 1800 to 1900 has been found all over the parish including the new hamlet of Daws Heath, which is rumoured to have greatly expanded beyond isolated farmsteads with the return of injured sailors and soldiers during the Napoleonic wars (1801 to 1815). The poor financial situation they found themselves in at that time forced them to take up new homes in previously undeveloped areas. It is not known whether such veterans deliberately came to the parish from towns or villages elsewhere, but this seems likely. (Later census records appear to show that very few if any veterans had moved in from outside Essex).

The first widely available detailed national census reveals the situation in 1841, just after the start of the reign of Queen Victoria. By then, 612 people lived in the parish, including 220 in Daws Heath. That appears to be a fourfold increase in the population of Thundersley from the late 1700s.

However, by the time of the 1851 census, the population of Thundersley appears to have fallen back to about 520. By the 1861 census, the number was up again slightly to 531.

Clearly, more analysis of the Victorian census information is required to check the accuracy of making estimates from the number of baptisms, a topic for ongoing future AGES research.