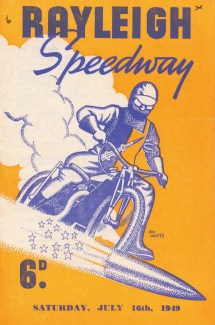 zoom
An early programme cover from Rayleigh Speedway (R. M. & R. (Holdings) Ltd)
with thanks to Peter Lewsey for making it available 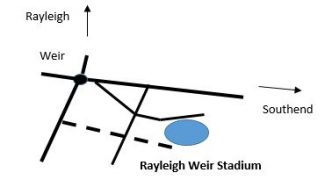 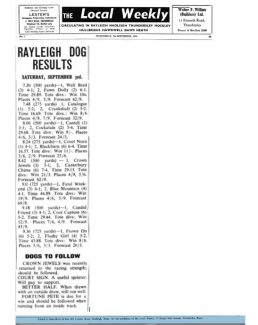 zoom
Extracts from 1960 No.1 edition of The Local Weekly News by kind permission of Jim Worsdale
Originally published by Oster-Ritter & Son, Printers, Hadleigh

Before I was born, my dad had motorbikes, starting with the time he was a dispatch rider between the Battle of Britain airfields. By the time I came along, we had outgrown the sidecar and he had moved on to cars.

However, he kept his interest in bikes and probably the first professional sports event he ever took me to was to see the Rayleigh Rockets speedway team in the late 1950s at their stadium at the Weir. I remember the excitement and smells from looking into the pits and the grit thrown up when we stood on the bends, as well as the sound of riders sliding into the wooden boards when they came off and the cheers and relief when they got to their feet and limped away.

Dad’s hero was Les McGiliivray who may then have been the Rocket’s number 1 rider.

There are many more avid speedway fans than me, so to get the full Rockets story, head for the “defunct speedway” website by clicking this link.

I seem to recall that you got to the stadium down a dirt track, rather than a surfaced road, but I may be remembering other speedway stadia that I visited. The stadium may well have covered the area now taken up by Argos, but perhaps others can confirm this.

I later remember going to the stadium to see greyhound racing, maybe not the classy end of the sport, but good family fun with the minimum bets laid in the hope of a win. At first, I only ever chose the favourites and my dad collected ridiculously small embarrassing amounts of money. I later learnt to read the form, and mostly lost, but very occasionally had one come home at longer odds. I see that The Local Weekly news for 7 September 1960 reported winning odds of no more than 4 to 1 on the previous Saturday. I would always, unsuccessfully, be looking for better odds than that!

I even went with my brother when they trialled the dogs before they returned to racing, no betting officially allowed then, of course.

I never got to the stock car racing that was also held at the stadium for a short period. Perhaps someone else can submit some of their photographs of those times so that the Archive can publish them to give a flavour of past local stadium events.

[Ed. As it has proven difficult to identify the possible remaining owners of copyright, if anyone believes (s)he owns the copyright of any of the images used in this article, we would be delighted to hear from you to receive your approval or meet any request to withdraw the images]