You are here: HomenextMain SubjectsnextPlacesnextSalvation Army Farm Tramway and Railway 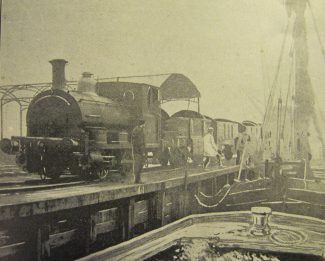 zoom
The railway engine at the wharf having crossed the railway line. 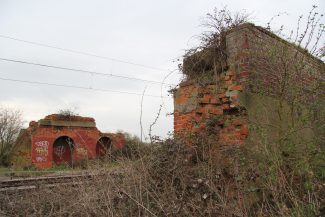 zoom
All that remains today of the railway bridge which crosses the Southend to Fenchurch Street line.
Graham Cook 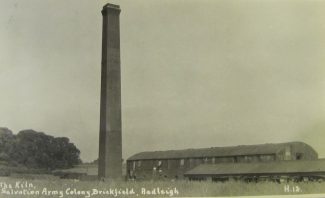 zoom
The brickfield at Sayers Farm. 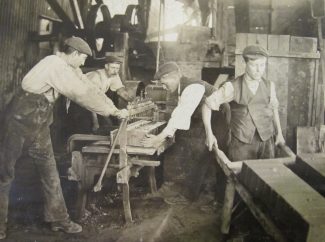 The following is an extract from the Salvation Army’s archives from a report on William Booth’s ‘Darkest England’ scheme dated 1892. It is regarding the introduction of the railway system and brick making. (Ed)

A tramway and a railway have been constructed in connection with the Farm, the former for the use of the farm, the latter to connect the brickworks. The total cost of the railway when completed will, the committee are assured, not exceed £7,925. The original estimate was £5,590. The excess is occasioned by the requirements of the London, Tilbury and Southend Railway Company for a bridge over their line of greater width than their contractor had provided for. An arrangement has also been entered into since the contract was made, by which, for the sum named, when the line is constructed, plant consisting of a locomotive, trucks, pugmill[1] and sundry articles for the brickfield, will become property of the ‘Darkest England’ fund. None of the Colonists have been employed in the construction of this railway. It has the approval of Mr Bird, though he was not consulted professionally prior to its construction. Mr Moore[2] was not consulted as to the advisability of such a railway, nor does the item appear in the estimate of capital expenditure handed in by him.

It is alleged that the railway will be a necessary adjunct to the brickfield if the output of bricks and the labour to be employed in that department equals the expectations formed of its capacity; that it will open up all the markets that can be served by water carriage of the Thames and its tributaries and that it will reduce the cost of freights by land to other markets which the Railway Company in the absence of competition would be able to charge.

The railway has been built on the advise of Mr J.E.Billups, a contractor of Cardiff, who is constructing the line and who stated to the Committee that when he was consulted by Mr Booth[3], he ‘willingly agreed to construct the railway, procure the plant and start the brickyard without any remuneration whatsoever to himself ’. Mr Billups further added that any money he had received on account of the contract had only covered wages, cost of material and incidental out of pocket expenses. Mr Billups  who stated in evidence that he had done work to the extent of three million in sterling in Wales; had constructed railways in Spain, France, Germany and Sweden, involving an outlay of from five to seven million sterling; had constructed the Graving Dock at Cardiff and had considerable practical knowledge of brick-earth and brick-making for forty years and had made bricks for himself for the last twenty five years, assured the Committee that in his opinion the railway would materially assist the working of the brickyard in the future. All the witnesses examined on the subject, with one exception, testified to the good quality of the brick earth and to the probable enlargement of the brickmaking work and consequent employment of a large number of hands. Among these were, in addition to Mr Billups already mentioned, Mr Montgomery, the editor of the ‘British Clay Worker’, who personally inspected the brickyards and had with him a practical brick maker and Mr Bowles, who superintends a brickyard near London. As few, if any, sales of bricks have been attempted, the produce so far having been largely used in the erection of the kilns and other buildings, there are no data on which to base estimates of future profit, but there seems no reason to doubt that if the quality of the clay be as represented, with good management and cheap water carriage to London, profitable results should follow.

It is believed that no further buildings will be required, except of a minor character, for the present number of Colonists on the Farm.

The building operations on the Farm and the necessary adaptation of the different premises for carrying on the City Colony were executed, with few exceptions, by a builder named Thomas Morgan. He received a salary of £3 per week and appears to have rendered estimates of work to be done, without entering upon contracts usual with builders. The execution of the work by Morgan was under the supervision of the architects employed by the Salvation Army, Mr Scott and Mr Gordon.

In three instances given to the committee, tenders for the work to be done were received from the trade, but Morgan’s estimate being lower than the tenders remaining on the list, he executed the work in all these instances.

Some 300 of ‘the  submerged’[4] and employed on the Farm. These have planted 40 acres with fruit trees and strawberries and converted 60 acres into market garden, at a cost of £20 per acre.

[1] Pugmill. The word means ‘to mix with water’. Pugmill, a machine to grind and mix wet and dry materials, usually for clay.

[2] Mr Moore refers to Mr Harold Moore who was the first manager of the Farm Colony (1891) appointed as a consulting Director, he was from Colchester.

[3] Refers to General William Booth, Founder of the Salvation Army.

[4] The Submerged.  Those below the poverty line with no hope, before the Salvation Army took them in.