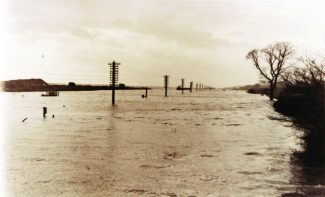 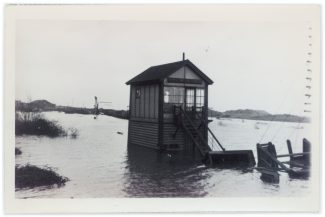 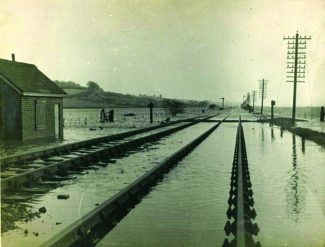 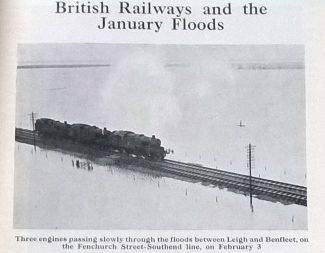 The full impact of the disastrous flood on the night of 31st January 1953 is well documented on the Canvey and Benfleet history archive websites. 58 people drowned on Canvey, and many hundreds were made homeless. Chris Worpole records in her article on the History of Hadleigh School (Topics, Education) that hundreds were temporarily accommodated at the school, and Heather and Albert Overall in their article on Castle House (Buildings) recall the evacuation of the cattle from the marsh to higher land. The flood was caused by the freak combination of a high spring tide, low atmospheric pressure, and very strong winds in the North Sea. As far as I know, no Hadleigh homes were flooded, but the community played its full part in the rescue and assistance of Canvey residents. However Hadleigh Marsh was completely flooded, and this article aims to draw together all the known photographs of the flooded marshes. If anyone knows of any more, they would be of great interest.

Photograph 1 is thought to have been taken on Sunday 1st February 1953 when the water had begun to subside but was still very deep. It is taken from close to Leigh-on-Sea railway signal box, west of the station below Belton Way West, and looks westwards towards Hadleigh with the Downs on the right.

Photo 2 is of the Leigh-on-Sea station signal box on the same date and from the same position looking south to give context.

Photograph 3 is taken from just east of Benfleet Station, looking eastwards, with Hadleigh Castle in the centre far distance. Again the flood appears to have subsided somewhat (although the railway rises through Benfleet), so it was probably taken on the 1st or 2nd February 1953.

Photograph 4 appeared in the May 1953 Railway Magazine. It is dated Tuesday 3rd February and is plainly taken from the air above Hadleigh Castle looking southwards, probably by a news agency. The magazine reported that “ three miles of the track between Benfleet and Leigh were submerged to a depth of ten feet”. The line was closed until “single line working was resumed on Tuesday 3rd February on the up line, and the down track was restored on the 6th February”. An emergency timetable of extra trains was operated from Southend Victoria to Fenchurch Street (via Stratford) until 6th February, when a full service with a speed limit of 20 miles per hour was restored between Leigh and Benfleet, and a normal speed service on the 19th February. If the railway really was submerged by ten feet, then much of the surrounding marshland must have been submerged by 14 -15 feet, and it will be interesting to hear from anyone who can verify or correct this.

Photographs 1 and 2 are thought to be by John Mann. 3 and 4 are by unknown photographers.