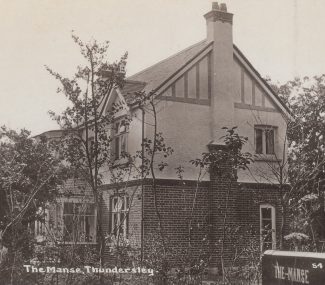 zoom
The Manse in Thundersley
H&TCA 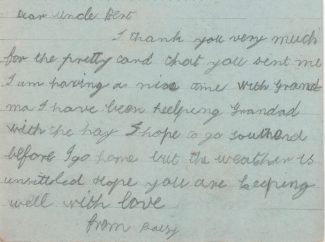 This postcard depicts the Manse of Thundersley Congregational Church when facing the London Road at the top of Kenneth Road (on the western corner).   Many years ago the building was sold and used as the Benfleet UD Council Offices. The Manse then moved to a big Edwardian semi-detached house along the Kiln Road, about half way between Highfield Avenue and Hadleigh Park Avenue.

Various extensions were built at the Kenneth Road site and, at some time, it was taken over by Social Services (ECC), presumably around the time Wiggins built the new Council Offices at Runnymede. There was, we recall, an associated bomb shelter behind the No.1 bus stop in Kenneth Road, the entrance to which was in an old Anderson shelter with a rockery over it.
There was an ambulance station around the back.

Nowadays the site hosts Thundersley Men’s Shed and operates as the church overflow car park. Many have admired the big mural of a dove by Scott Irving, which dominates the site.

On the back of this postcard, a very young Daisy writes to her uncle from her grandparent’s house, where she is staying.  It appears that Uncle Bert was serving in a siege battery as part of the British Expeditionary Force in France.
We assume that the card dates from 1914 – 1918.