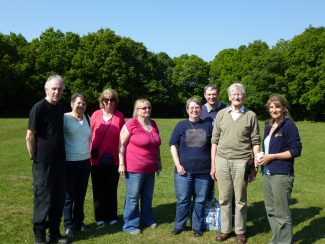 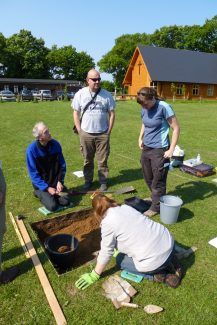 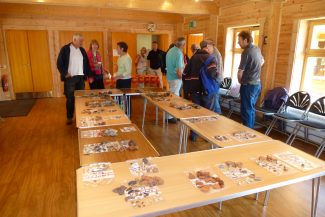 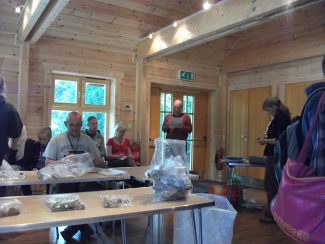 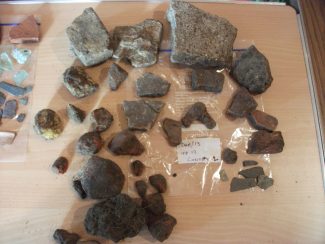 zoom
Some of the Ages finds
Photo by Terry Barclay

As a result of contacts arising from the Archive’s All our Stories Lottery funding, five of the Archive’s editors acted as co-ordinators for Access Cambridge Archaeology (ACA) Higher Education Field Academy (HEFA) to arrange for school students to dig ten, 1 metre by 1 metre, test pits in Daws Heath on 5th and 6th June, as well as enlisting Ages AHA, the local community archaeology group, to dig two more.

Various artefacts were found as all pits were dug down at least 50cm below ground to the natural subsoil that underlies the heath. These included pottery, clay pipe stems,  animal bones, heated flints (probably pot boilers), and some worked flints probably over 3,000 years old.

The Dig will be formally added to the archaeological records by ACA. In her blog (which can be found on the ACA website), Carenza Lewis has reached the interim conclusion that the earliest pottery to come from any of the pits is Early Medieval Sandy Ware, dating to 1100-1400 AD.   This follows the pattern of most of the Essex communities ACA have excavated test pits in, which generally do not produce pre-Norman material – unlike villages further north in Suffolk, Norfolk and Cambridgeshire.

None of the Daws Heath pits produced more than a single sherd of High Medieval pottery, which ACA would normally interpret as indicative of low-intensity use such as pottery spread when manuring arable fields rather than settlement.   A similarly low intensity of finds of Late Medieval date suggests the same situation continued in 14th – 16th century, although there is at least no sign of any significant drop in activity in the wake of the so-called ‘disastrous’ 14th century.   Most of the pits also produced little post-medieval material either, suggesting that the settlement is of mostly relatively recent origin.

This would accord with the known written history of Daws Heath, although it is likely that the probable use of Daws Heath for medieval ploughed arable fields has been taken back some centuries.

Carenza also concluded that many of the Daws Heath test pits produced worked flint, however, suggesting this low-intensity use of the area was of very long standing.  Perhaps the most memorable find was an unusual worked flint flake (from Test Pit One) which had been retouched along its ventral/concave side. Even more intriguingly, this was recovered from the top of a well-defined post hole, suggesting a structure of some sort was present in the late Neolithic or early Bronze Age.    On the basis of the finds from the test pits so far, this may well have been the most substantial structure to be built in the area for the next three thousand years!

This flint was one of many worked flints found in Daws Heath gardens ad hoc over the years, but never before have such a number of archaeological test pits been dug to such a depth.

Following the dig, all the finds were taken to Cambridge University and the students visited the university on the following day before being set the task to write formal reports on their individual test pits.

So far, the pottery has been dated by Paul Blinkhorn (who used to be seen on Channel 4’s Time Team) and the results of the dig can be found on http://www.arch.cam.ac.uk/aca/dawsheath.html

Carenza hopes to return to Daws Heath next year, in order to see whether pre-modern occupation is really as minimal as the 2013 test pits have indicated – or whether it has simply been missed so far.

So, if anyone living around the three sides of the triangle formed by Daws Heath Road and Western Road would like to volunteer their properties for possible test pitting in 2014, please e-mail the Archive on hadleighhistory@gmail.com.

Terry Barclay, Secretary for Ages AHA    (and Local Co-ordinator for the 2013 Dig on behalf of The Hadleigh & Thundersley Community Archive)