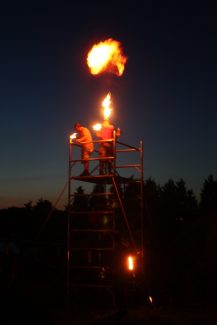 Queen Victoria celebrated her Diamond Jubilee on 22nd June 1897. This was the first time our Nation could celebrate a monarch with  60 years on the throne.
In June 2012, we celebrated our present Queen’s astounding achievement of a Diamond Jubilee, our own great historical occasion. On the 4th June, Queen’s Scout William Burrows lit the Daws Heath Beacon for Queen Elizabeth II, attended by the fantastic skills of the Circus team led by Ben Rose and supported by the Canvey Air Cadets Band.
The event was planned over eight months but re-engineered in just three weeks by a fantastic team of ‘can-do’ people to overcome a late change in venue. Over 150 people enjoyed a spectacular display of fire eaters & juggling,  created by the support and loyalty of Vernon Wilkinson, Lesley Bacon, the Stores Team at Essex County Scout Council, the Scout Fellowship, the Scouting Circus Skills team Pluto Juggling, Marion Wood’s Westcliff Cub Pack and the splendid Canvey Air Cadets Band, and our sponsors Bellhouse Investments.
With resolve and individual enthusiasm, our team created this “once-in-a-lifetime” event in the 2012 Jubilee Year, and  the beautiful Beacon was lit in line with the Beacon lighting times organised by the Pageantmaster. Even at short notice, they changed their master list which means the correct location has gone into the book prepared as a record for HM The Queen. There were over 4,200 beacon lightings that night.

Profits received from the Daws Heath event are being donated to Cruse Bereavement Care Southend (information here) which offers a much needed service to our community. We offer counselling to people who are going through the hardest times of their lives, having lost family or friends.  The Queen is Patron of the National Charity, details here.