Based on the family photographs and memories of Joyce Cammell interviewed by David Hurrell in 2016, with details from books by railway historian Peter Kay. 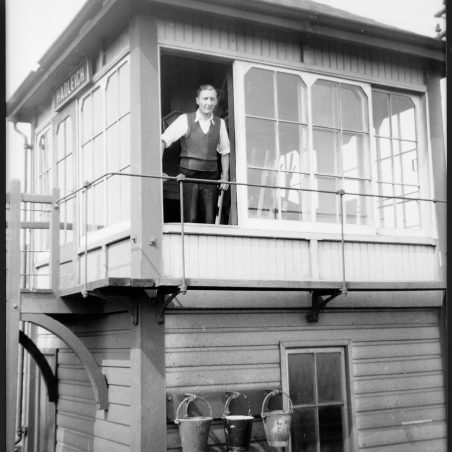 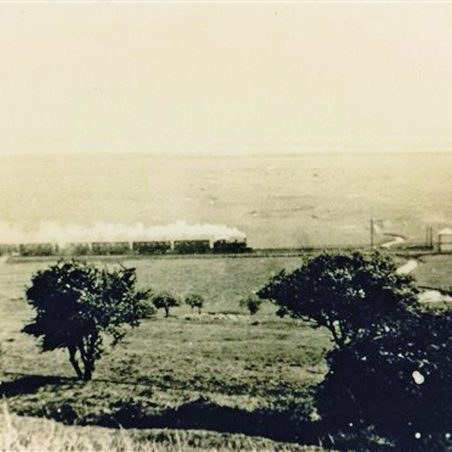 A vintage view from the Castle escarpement
Public domain 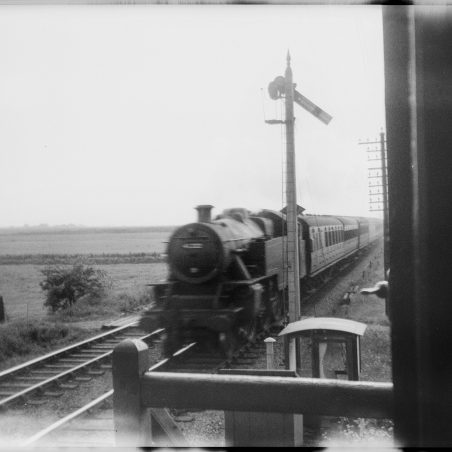 The 1958 photograph is of George Cammell at work in Hadleigh Signal Box, where he was the morning shift signalman from 1953 to 1960, and who in that time must have seen in some two thousand Hadleigh Marsh dawns, all from a work environment quite unchanged from the 1870s. The peace and tranquillity of the marshes was interrupted for ever on 1st July 1855 when the railway first opened, taking almost a four mile crow-line from Benfleet to Leigh-on-Sea.
Hadleigh Signal Box was built in 1901 (rebuilt as pictured in 1916) and its sole purpose was to enable two trains (each way) to be on the lines between Benfleet and Leigh-on-Sea, instead of just one. This became a pressing need as the number and frequency of trains grew, especially in the “rush hours” and on Summer weekends, with many extra day-tripper trains from all over London. The distance shortened to about 3.25 miles when the current Leigh-on-Sea Station was opened in 1934, but the need remained until 1960.

The second photograph shows the position of the box directly below Hadleigh Castle, on the north side of the line and just east of the existing farm crossing. The date of this photograph is thought to be 1916/7. In the railway history world, these are the only known photographs of the signal box. Joyce recalls that her husband George was the regular morning shift signalman, and living in Thundersley, he was supposed to report to Benfleet at about 5:30am and then walk along the line (or be taken by train) the two miles to Hadleigh. Strictly, this was the only way to get there, as there was no formal right of access from Castle Lane. However, George soon made an arrangement to cycle to the Salvation Army Colony gatehouse and leave his bike there, walking the final half mile down to the box each day – often in the dark and in all weathers – to be on duty by 6:10am. He was there until 12:45pm most days, and made up the rest of his week with a long weekend shift. The box was then manned by another regular man (name unknown) for the evening period 4:45pm to 23:15pm, and for much longer hours at weekends.

Although not built until 1916, all of the design, technology, contents and working practices had been well settled by the 1870s and here remained so until 1st December 1960, when the electronic age finally arrived. In the 3.0m by 3.0m space there were six hand levers for four signals (two each way) and two fog signals, a reminder of how very foggy the Thames marshes could be in the 1940s to 1950s, potentially disrupting train services. Above them, on a shelf, were two block telegraph instruments with their handles and gongs to ring the codes, a telephone for very occasionally speaking to the next signalman, a small desk for the train register (recording by hand every train and its time), a coal stove as the only heating, a clock, oil lamps and a couple of chairs.

Joyce remembered that there was no electricity or water (George took a bottle), and only a privy, coal shed and lamp hut outside. Herein George would have spent his fifty (or so) hour week and, with strict rules about no visitors or radios, it left lots of time to study the sky and the marshes.
Electric light signals came in 1960 in preparation for electric trains in 1961. The box closed on 1st December 1960 and was probably broken up or burned on site.

Joyce recalls that George was moved to Upminster which he did not like at all, but on the 18th April 1961, he was badly injured in a train crash at Pitsea, recovered, and spent the rest of his career in the booking office at Benfleet.

Finally, this family photograph shows the view looking out of the signal box door at a train heading for Leigh-on-Sea.