You are here: HomenextMain SubjectsnextWW1 and earliernextThe Battle of the Somme Film 100th Anniversary Showing in Hadleigh

The Battle of the Somme Film 100th Anniversary Showing in Hadleigh 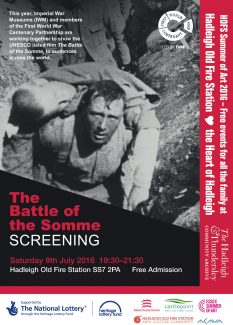 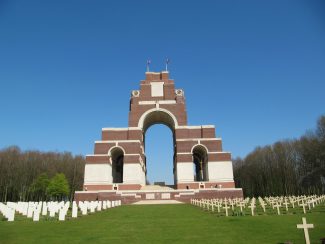 zoom
The Thiepval Memorial to the Somme
Graham Cook 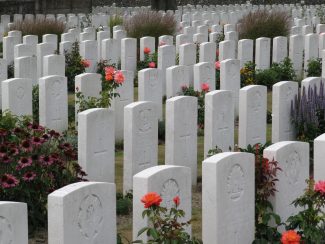 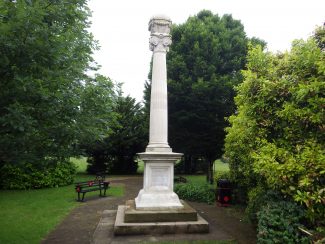 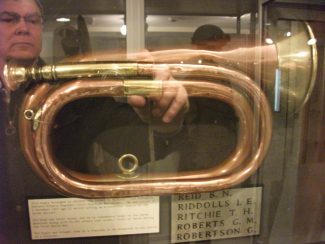 On Saturday 9th July 2016, as part of the Heritage Lottery funded “HOFS Summer of Art”, The Hadleigh & Thundersley Community Archive had a near-full house of 90 local residents at their pop-up cinema in the Hadleigh Old Fire Station to see this historic silent film and associated displays.

The film, made available by the Imperial War Museum as part of their Centenary Partnership, commemorated the original showing of the film in cinemas throughout Britain in 1916. In that year, the film was seen by around 20 million people (the UK population at the time was 43 million.) It was a moving mix of historic record and propaganda, then so important in lifting spirits during the First World War.

The film brought home the prolonged pounding of the German lines by the British artillery prior to the battle and the organisation behind the battle lines as demonstrated by the first aid patching-up of the lightly wounded so they could rejoin the battle and the movement of so many German prisoners, eventually to Britain.

Five reels of silent film accompanied by an excellent musical score filled in some of the gaps in what our grandfathers often never told us about the war.

A short introductory film set the main film in context, revealing just how many men had died or were injured in this bloody battle.

Before watching the film, there were 10 moving excerpts from the diaries of a number of the soldiers involved, by 5 readers who couldn’t help but get slightly emotional during their readings. Such awful times.

The Archive presented display boards including selections that will be in Hadleigh library for the full 4 months’ length of the battle from 1st July. Much of the material regarding local people who lost their lives at the Somme can be found on this website in the “Roll of Honour“ articles by Val Jackson which covers all local people lost during the whole of the First World War and by Terry Barclay’s list of those who lost their lives during the Battle of the Somme.

Other items displayed in the hall evoked the Great War, including an over 100ft long list created by Colin Letchford of all those 19,240 British soldiers who died on the first day of the Somme and the Hadleigh United Reformed Church Roll of Honour which includes both victims and survivors of the First World War.

In particular, the Archive is keen to receive any photos and stories from those whose relatives from Hadleigh and Thundersley survived the Somme. We can turn these into articles to perpetuate the local memories of your ancestors.

The performance ended with “The Last Post” played by Harry Hollands of the Essex Marching Corps, which received enthusiastic applause from the audience.