Background to Celebrations of Victory in Europe [VE] Day

The end of war in Europe in 1945 occurred in the early hours of Monday 7th May when German General Alfred Jodl signed an unconditional surrender document at Reims in France at the headquarters of Supreme Allied Commander General Eisenhower. Prime Minister Winston Churchill received news of the surrender at 7.00am that morning. The surrender was effective from the following day.

Before any official announcement was made, the Home Office issued a circular advising the nation on how they could celebrate: “Bonfires will be allowed, but the government trusts that only material with no salvage value will be used.” The Board of Trade did the same: “Until the end of May you may buy cotton bunting without coupons, as long as it is red, white or blue, and does not cost more than one shilling and three pence a square yard.”

It was not until 7.40pm in the evening that the Ministry of Information made the official announcement that:  “In accordance with arrangements between the three great powers, tomorrow, Tuesday [8th May], will be treated as Victory in Europe [VE] Day and will be regarded as a holiday.” (The delay in the official announcement was due to Stalin who had wanted his own signing ceremony and a further surrender document was signed in Berlin the following day by German Field Marshall William Keitel.)

At 1.00pm on VE Day, Winston Churchill went to Buckingham Palace to have a celebratory lunch with George VI. At 3.00pm, Churchill spoke to the nation from the Cabinet Room in 10 Downing Street. The last official event of VE Day was a broadcast to the nation by George VI at 9.00pm. Buckingham Palace was lit up by floodlights for the first time since 1939 and two searchlights made a giant ‘V’ above St. Paul’s Cathedral.

The Southend Times & Recorder newspaper reported that, in Hadleigh, the broadcasts by the Prime Minister and His Majesty the King were shown to the audience at the Kingsway Cinema after an announcement by the manager, Mr John Lake. (The audience had come to see ‘Between Two Worlds’ [Wikipedia] and a musical feature entitled ‘All American Band’. )

On VE Day and in the days following, street parties and other celebrations were held across the land. Neighbours shared food, some items of which were still rationed, and made bunting to decorate their houses and streets. The Southend Times & Recorder reported that, by the evening of Wednesday 9th May, many of the public houses in Hadleigh had run out of beer owing to the amount consumed on VE Day.

In Hadleigh, at least eighteen VE street parties were held. Some were actually held in the street; others were held in gardens and one was held in the school grounds. Photos of many of these have been uploaded as separate articles and can be seen by clicking on the links below.

The photos have been annotated with a number for each person, and the names of the people, where known, are listed below the photo. If you attended any of the street parties in Hadleigh then your memories of the event would be very welcome.

Other Hadleigh street parties are known to have been held at Arcadian Gardens, Beresford Gardens, at Castle Lane, in a garden at Homestead Road and at The Woods (off Scrub Lane). The following reports are taken from the Southend Times & Recorder of 9th May 1945:

Beresford Gardens VE party  – “Among the numerous parties and other events held in Hadleigh during the VE holiday was that at ‘Vycliffe’, Beresford Gardens, where a party of some 30 people spent an evening celebration on the lawn. The occupiers of the property had flood-lit the lawn and had also gaily decorated the surroundings with various coloured flags. The celebration continued until after the hours of darkness.”

Castle Lane VE party – “Another children’s party was held at the residence of Mrs Mason, Oak House, Castle Lane, Hadleigh, where 26 children and 14 parents sat down to tea on Wednesday evening. The refreshments were provided by residents of Beech Road and Castle Lane, and the children entertained themselves with community singing.”

The Southend Times & Recorder of 16th July 1945 contained this report:

Arcadian Gardens VE party – “One of the last celebrations of Victory in Europe to take place in Hadleigh was that held on Friday at ‘Homehurst’, Arcadian Gardens, when about 13 children from the district were entertained to a combined victory and birthday party. Arrangements coincided with the birthday of Jennifer Bridge, daughter of Mr. and Mrs . P. W. Bridge (occupiers of ‘Homehurst’) and they decided to make it a combined event consequently many local residents gave their valuable assistance, including that from Mrs Herbert.  For the occasion, chairs and tables were loaned by the kind permission of the Rector of Hadleigh, The Rev. L. J. Stanford, of St. James the Less Parish Church.”

The Southend Times & Recorder newspaper of Wednesday 9th May 1945 gave the following account of another party:

One of the largest children’s parties to be held in Hadleigh took place on Thursday(?) when the Benfleet Council arranged a Victory Party for the children of Hadleigh and over 1,000 attended. The event was organised by local councillors, with the co-operation of Mr Tutt, headmaster of Hadleigh Council School, and it was held at the Castle Grounds. 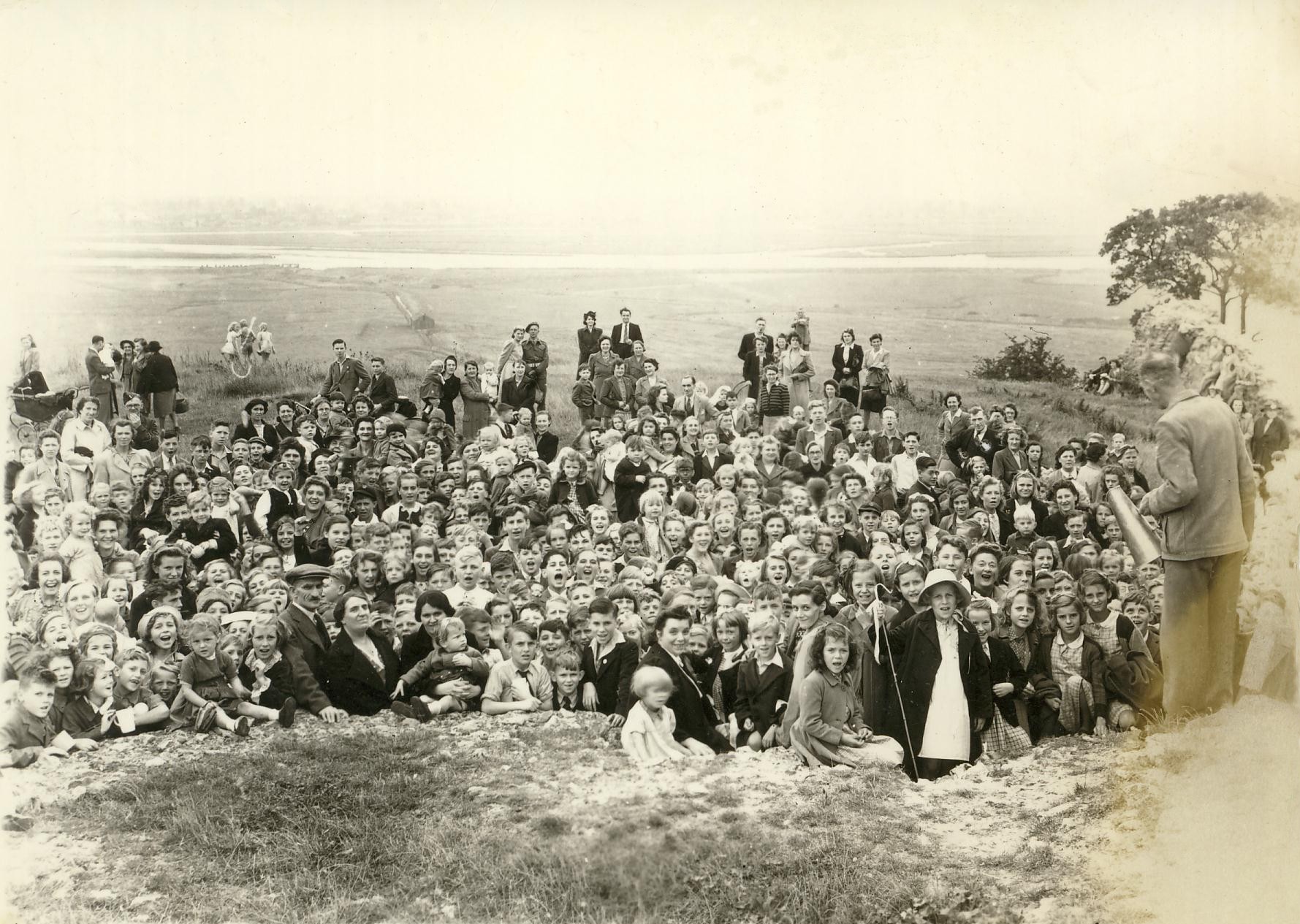 Opening with sports and ice-cream, which was distributed to every child, the afternoon continued with a tea at which milk was given to the babies. The whole afternoon was a most successful one. Amongst others who assisted with refreshments were members of the Salvation Army, Civil Defence, W.V.S and soldiers.

After tea, an entertainment was provided which concluded with the singing of “Land of Hope and Glory” and the National Anthem.”