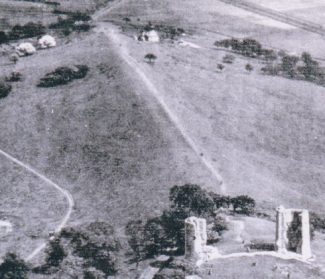 A few years ago, Julius Stafford-Baker 4th provided a lot of information regarding his time on the Leigh Hadleigh borders, especially during World War II. The following local picture of about 1944 is formed around his direct experiences and most is from his direct quotes.

Julius recalls that as a small boy from years 5 to 10, his area of knowledge only stretched from “New” Leigh Station and the cockle sheds, the two towers of Hadleigh Castle, (but not Hadleigh itself) and up to the London Road.  Down and over the railway to the sea wall and a bit over that.  (He only got to Two Tree once, right at the last years).

His ancestors had previously lived in Marine Avenue from about 1903. 77 Thames Drive was the first house built on that Leigh estate and was the show house, sold at once to the Editor of The Southend and Westcliff Graphic, his grandfather, also named Julius Stafford-Baker.

“My Father started by being trained by Grandpa in the apprentice manner as a black and white man, some would call them commercial artists. Dad worked for the same firm pre-WW2 but meanwhile had been training himself as a fine art painter, never attending any Art School or anything like that. He was a War Artist for the R.A.F. in WW2, effectively replacing the sadly missed genius Nash. He painted for the RAF in over 60 countries and also worked for RAF Intelligence. (Previously RAFVR, he became a regular after WW2 and as a S/Ldr served with the British part of the Occupation Force in Japan. Only there did he have any sort of painting tuition).”

77 Thames Drive had the area Air Raid Warden’s Post in the back garden, and still did in about 1970, gone now perhaps.

Julius referred to the troops from many countries who trained locally. “There were Poles on the assault course down by the railway line, but based in his part of Leigh.”

A US bridge building regiment had black soldiers from the deep south. Two volunteered to dig Grandma’s allotment for her. They were not living in his part of Leigh.

Right before D-Day, the Highland Division were based around Thames Drive, (many many houses were empty) with their HQ, barracks office and guard room all in Thames Close. They went off to D Day down Thames Drive with a piper in front, watched by a small group of locals at the top of Belton Way, including Julius. Their cap badge was a wonderful large deer’s head with antlers in silver.  (One cap badge he didn’t get).
Soldiers had taken up floor boards to light fires in the houses.

The shepherd’s house at the end (east of Hadleigh Castle) was used for house-to-house fighting training. Many thunderflashes were used.

Prior to D Day, the vehicles had their radiators and various gaps filled with a temporary waterproofer, a sort of plasticine, sticky green stuff, which, of course, he got in his hair. “Very cross Grandparents, took petrol to remove!”

“Prior to D Day, a simply vast fleet of ships in the Estuary, all moored in neat rows. Hundreds and hundreds of ships.”

Almost the last plot along Western Road had never been built on, and was the home of the tower for the air raid siren.

“We found an unexploded incendiary, and threw stones at it until it went pop and started to burn.  A good fire developed in the bushes and the fire brigade came, of course we ran away and hid!!  Then aged maybe 6 or 7!”

A policeman visited St Bernard’s Convent (the only school remaining open at one stage) to give a talk about dangerous butterfly bombs. “Odd contrast his uniform against the nuns. I was terrified of the Mother Superior, and there was one nun who was German!”

“Grandfather, Father and I all have the same name. So three ration books. One day a policeman arrived and started asking questions of Grandmother, who called us all to stand on the doorstep in a row, he went away after a bit.”

“A Leigh cockle boat is not the same as a Bawley, which was much larger and of very different build. Leigh men were specially skilled as fishermen, as they went for different types of fish at different times of the year with different kit on board. Other places just go for one kind of thing all the time and only have the one skill. Two Leigh boats, Renown and Vanguard, were lost at Dunkirk, and our house took two women civilian refugees in after Dunkirk. Language incomprehensible, save one or two words of French. In fact, they were Flemish speakers from Belgium still shaking with shock. The Red Cross took them away after a day or two. “

“A V2 landed just outside the Two Tree Island sea wall, the biggest bang you ever heard. At low tide, a large pool of water in the mud, surrounded by metal bits. We kids got there first, but a policeman arrived and made us give up our souvenirs. Subsequently he fell over in the mud, a joyful moment that!”

“The council decided to remove the house boat dwellers, and tow away their houseboats. The Tower Bridge tug came with a vast wire rope and chain. Several house boats simply pulled to pieces. People on the sea wall distraught. Police in attendance, eventually chased us kids away. I never forgot that event, and it has coloured my attitudes to this day.”

Johnson and Jago’s yard built MTBs in the war, floating them down the creek for the Bell Wharf crane to load in the engines. They used a special building technique (from the USA): veneers laid diagonally, glued and stapled to frames.

“The Cinder Path and Chalkwell Beach were, of course, all closed off, barbed wire, soldiers, passes to be shown and all the rest.”

“Prior to D Day no-one could go anywhere. Buses stopped at the Borough Boundary, near the hanging post on the London Road, (Is that still there, with its little iron railing round?)”

“PS field beyond the end of Western Road downhill was an orchard right until war’s end.”

I feel that the Archive is very privileged to have these detailed recollections and we are most grateful to Julius Stafford-Baker 4th for sharing them with us.

If you have similar memories, why not add them as a comment to this article? I am sure that they would be of great interest to local residents.