One Tale from a Wartime Classroom 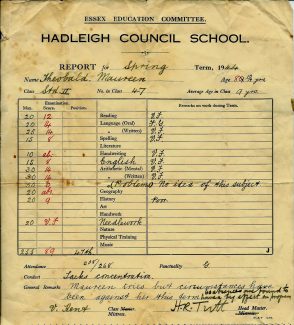 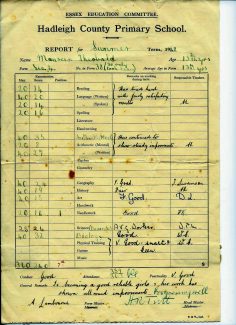 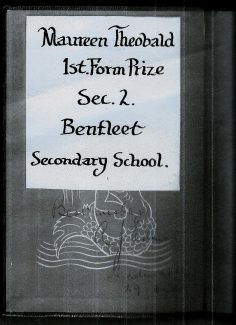 Maureen has many tales from her time in the Second World War at Hadleigh School under headmaster, Mr. Tutt. This is just one told to me to explain her school reports during that period.

In 1944, Maureen came 47th out of 47. (Yes, there were as many as 47 in her class!). Someone always has to come bottom, but in this case there was an explanation hidden behind the teacher’s comments “circumstances have been against her” in that term.

The first indication of something amiss is in the attendance record from which can be deduced an absence on a very high 60 occasions. She was not an ordinary truant, but not only did she have illness herself during the year, but as a girl of only 8 had to stay at home to take sole responsibility for her younger brother and sister and on a few occasions her baby sister as well. This was not a decision her mum took lightly, but what else could she do with Maureen’s dad in Rochford Hospital with terminal cancer?

Sadly her dad died that year and her mother struggled to keep the family going, especially as although he had been a regular soldier, he had retired from the army a few years earlier and as he died of lung cancer, her mum was not entitled to any army pension.

By age 13, her last report from the school by Mr Lambourne, her favourite teacher, shows her achieving a very creditable 7th in class (with only 4 days missed in the whole year!). (Maureen’s fully named class photo for that year will, in due course, be the subject of a separate article on this website).

It got even better the following year when she moved for her final school year to the new King John School (then known as “Benfleet Secondary School”) where she finished top of the class and won a book prize. She chose Jane Austin’s “Emma” as she thought her mum might like to read it. How proud her mum must have been.

(This article was written by Terry Barclay in 2016 following a chat over a very welcome cup of tea with Maureen Hume, nee Theobald (1935 – 2019), in the very bungalow she both lived in during those war years and still continued to live in then).