Maureen's tale as a child 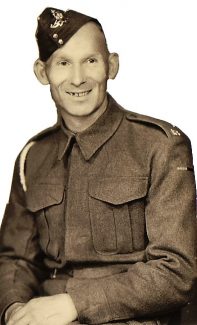 This story first appeared on the BBC History website under “WW2 People’s War”, an archive of World War Two memories – written by the public, gathered by the BBC.

I was four when the war started.   The first memory I have is of standing in the garden, looking up at the sky, I didn’t  know at the time what I was looking at, and later found out from my mother, that the siren had sounded for the first time.  Luckily it was a false alarm.  We then moved to where I live now and the war started with a vengeance.  My mum used to put a mattress under the table and one on top and we three children sat underneath.  My gran used to sit in a chair by the table with a pillow over her head, though what good it would have done her, I don’t know.  We did have a brick shelter built, but as it faced the glass lean-to, we had only used it a few times when someone told my mum, if a bomb dropped, the glass would all blow into the shelter.

We were I suppose lucky, though we had bombs drop all around us, we were alright.  As children we were not allowed to go far from Hadleigh.  One morning we were told that a bomb had dropped on the school, but found out it was just an incendiary which fell in the playground, the only damage was a small hole.

My father was called up in the army in 1942, he was 39.  I remember him with a big army truck calling in on his way to Shoebury, he was based at Woolwich barracks.  He died of cancer in 1944, mum didn’t receive a pension so times were much harder.

The air raid wardens used to keep an eye on us and stand on our corner.  One night mum heard a noise, stuck her head out of the window and said “is it a gas raid?” if it had been, we would all be gone!  It caused a laugh.

One night in 1944 we were all in bed when we heard the dreaded drone of a doodlebug, the engine stopped, mum got out of bed and just stood by the side, I dived under the blankets.  There was one almighty bang, it had crashed further up the road.  Only one person was killed, a Mr Jones, just discharged from the army with shell shock, he’d gone outside.  I think that was one of the most frightening things.  Though there were some tragic ones, not far from us in the next road.  The men had come home on leave and decided to go to the pub, a bomb fell on the bungalow killing two people.  When the firemen came, they walked on the walls, not knowing that a baby was underneath.

So many stories.   My husband lived in Benfleet, and his dad had made a shelter and my husband kept his fish aquarium down there.   The warning went, then the all clear and they went to bed.  The next morning he went to feed his fish but they were all dead.  His Aunt Vera who had been sitting next to the fish, had flicked her cigarette ash into the aquarium and killed them all!

I hope my granddaughters never have to go through a war.  Let’s hope someone will brave enough to ban all wars and weapons.