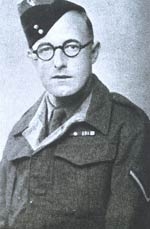 zoom
A DCM and bar

Searching through The Times archive, I found an article from 2006 (Corporal ‘Nutty’ Hazle, the Times of Tuesday,  Aug. 15, 2006) which reported the distinguished war career of Corporal Edmund Bryant Hazle, born in Hadleigh, who served in WW2 as a stretcher bearer.

He has the rare distinction of twice receiving the DCM (Distinguished Conduct Medal) and would have been awarded a DCM and bar.

His parents, William and Gertrude, were married and lived in London and later moved to Hadleigh after 1911. By 1918, they were living at Garrolds Farm, Daws Heath. Edmund was born in Hadleigh in 1918 and went to school locally. (His sister, Gertrude Eva, was married in 1919 in St James-the-Less).

Apparently,  after leaving school in about 1932, he worked in the printing trade. Then before the outbreak of war, he joined the Territorials. He became  a member of the 4th Battalion, the Essex Regiment, where he served in the battalion band.

In July 1942, Edmund was on Ruweisat Ridge, 10 miles south of Al Alemein, as the 5th Indian Division suffered heavy casualties in the attack upon Rommel’s position. Under fire, he led a stretcher team collecting those left lying in the open. Despite being wounded in the shoulder and the face, he continued tending the wounded even after he was no longer able to help carry them.

His DCM citation described his courage as “an inspiration to all”.

18 months later after recovering from his wounds, he once more saw action. In March 1944, he was at Monte Cassino in Italy with the Essex Regiment. In torrential rain, the Ghurka Rifles moved through ruined houses and rubble up the hill against machine guns and mortars. The fire was too fierce and only the 4th Essex were able to follow the Ghurkas as reinforcements, including Edmund and his stretcher bearers.

The combined Ghurka-Essex battalion sustained heavy casualties and could get no further, with the Medical Officer unable to reach the forward companies. Edmund administered morphia, dressed wounds and carried out an amputation, but for 6 days was unable to arrange evacuation because of the intense enemy fire.

His second DCM citation, by the Ghurka company commander, said, “there is no doubt that the very large number of wounded which were successfully evacuated owe their lives to him” and  “The magnificent service rendered by  this NCO under the most grim and dangerous conditions, the medical skill he displayed and his never faltering devotion, bravery and spirit have earned him the universal admiration of the whole force isolated in this position”.

After Italy,  in December 1944, he served in Greece during the civil war between the government and communist guerillas as the Germans withdrew.

More details of his service and actions can be read at https://en.wikipedia.org/wiki/Edmund_Hazle

In 1945, he was demobbed and returned home to rejoin the print trade.

Early in the same year, his marriage to his wife, Cissie (nee Clements), was registered in East Ham. They went on to have a son and daughter locally (Brian in 1946 and Barbara in 1949) and a further daughter, Margaret (in 1952) in West London.

Edmund was recorded as a printer’s warehouseman when his mother died in 1954.