The History of a Hadleigh Family,
By Robert Delderfield 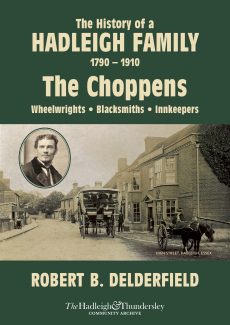 Beautifully produced in 64 pages with abundant monochrome pictures,  this is the fifth book from the Hadleigh & Thundersley Community Archive.
The Choppens were one of the families that left a strong, positive impression on Hadleigh, Essex. John and Mary Choppen, newly married in 1825, settled in Hadleigh High Street and their descendants were still there in 1980!   In this book, we follow the nineteenth century adventures of John, Mary and their seven surviving children.
Robert “Bob” Delderfield has been giving his superb, popular talks on Hadleigh, surrounding areas and the people for nigh on half a century.  His enthusiasm for local history continues unabated and, more recently, his detailed research extended to Thundersley and Daws Heath.

In Bob’s uniquely accessible style, he has blended scholarship with narrative flair to give us a strong flavour of a vibrant Hadleigh village, in an age where wheel­wrights, blacksmiths and innkeepers were fundamental to community life.
The family trees,  numerous anecdotes and useful references are informed by Bob’s meticulous and painstaking research which included delving into the records of the Court of Chancery.  We learn how the Choppen family developed into other trades, whilst spreading locally and internationally.
This delightful book – available at £4.99 from events in Hadleigh & Thundersley –
(or order here at £5.99 from Essex 100 to allow for postage to anywhere in the UK)
both stands alone as a uniquely valuable work and can also be the catalyst for further research.