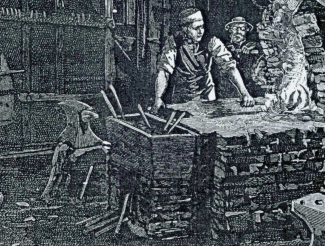 In 1849, there was a newspaper article involving a case of witchcraft in a village a few miles from Rayleigh. Although James Murrell (and Hadleigh) is not mentioned by name, there are other indications that the article referred to him: ‘A girl in the village had been long subject to fits, and as family consultations and councils traced the mysterious malady to witchcraft, “a cunning man,” celebrated there-abouts, was called in to counterplot the mischievous old hag, who was supposed to be squatted in some dark corner, muttering her spells and enjoying the writhings of her victim.  The conjuror, of course, undertook the job for a consideration, and immediately set the village blacksmith blowing and beating away to manufacture an air-tight iron bottle . . .this was completed, and being filled with parings of the patient’s toe-nails, locks of her hair, and fluid, was placed over a roaring fire. . . . [the witch bottle] jumped out with a loud explosion, blowing away the grate-bars and the fire’.

In about 1890, Arthur Morrison visited Hadleigh to discover more about Murrell. He interviewed his son Edward ‘Buck’ Murrell and the town’s former blacksmith, Stephen Choppen. He also read papers and books in Murrell’s wooden chest. In 1900, Morrison wrote an article in the Strand magazine and published a novel Cunning Murrell about his findings. In this fictional account of Murrell’s life, Morrison called the village blacksmith who made the iron ‘witch bottles’ Steve Lingard.