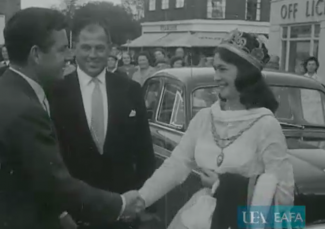 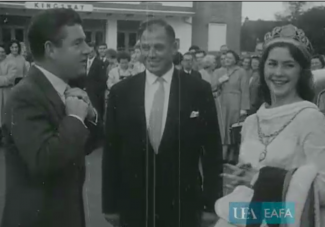 There are at least two films in the East Anglian Film Archive (EAFA) with references to Hadleigh, Essex.

Click on this one to see a very short, silent film of Kenneth More and the Kursaal Flyer in 1959 in front of the Kingsway Cinema.
Note the brief view of Yaxlees, a unique department store of the time, later called Thomas’s and currently (2022) Latino’s Restaurant.
Under the playback area are some notes which explain the reason for Kenneth More’s visit and still show some confusion as to which Hadleigh is being visited.
Note: the East Anglian Film Archive makes the video available for personal viewing only.

The second clip from about 1955 is also for personal viewing only.
From 8 minutes until 8 minutes 38 seconds in this video, which has a delightfully RP soundtrack, there is a brief section on Hadleigh Castle;  click here to start.    Readers will be pleased to hear that the castle has not been submerged in brushwood and ivy for many years (and is still OK in early 2022.)

However, the link addresses sometimes change, in which case readers may have to search the EAFA  for Kenneth More and Hadleigh Castle, at https://eafa.org.uk.

With grateful thanks to the East Anglian Film Archive.