Since this website was founded very many people have supplied information and happy memories of Hadleigh’s long lost cinema, The Kingsway. I have just been re-reading these articles, most of which have produced a large number of responses from people who remembered the cinema with great affection. There are some truly wonderful photographs which should not be missed in the article on Alice Chafer’s memories.
{Ed: There is a link to Alice Chafer’s excellent photographs at the end of this article.}

A year ago, David Dedman, the well-known Southend property consultant, very kindly allowed me to interview him and tell me about his memories of the Kingsway Cinema. This article,  based on our meeting, shows the cinema more from the owner’s viewpoint than that of the cinema-goer.

David is the grandson of Mrs. Mabel Eva Rolls. Her first husband was Percy Stanton who died in 1928 from wounds suffered in the first world war. She married again, this time to Frederick Rolls, in 1930.

The Kingsway was built in 1935 by the Rolls as an epitaph to Mabel’s  first husband. It was built by a direct labour force, taking 9 months and costing £40,000, all borrowed. 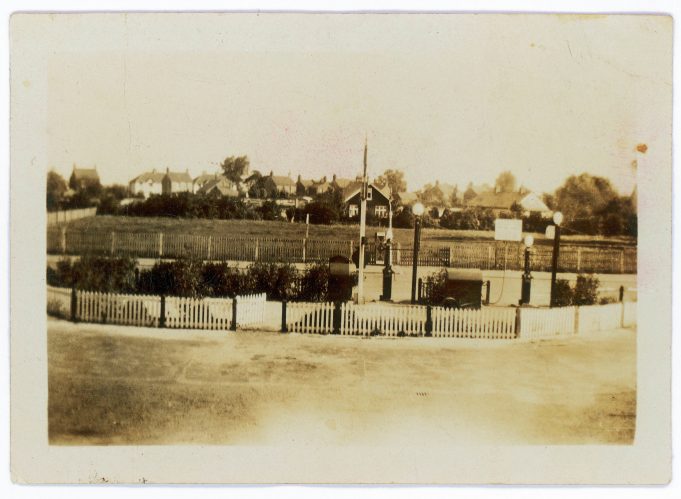 The view in 1934 from the Crown before the cinema was built. The fenced off area contains the Crown’s petrol pumps. Beyond that is the road in front of the field that was to be the cinema.    [H. & T. C. A.] 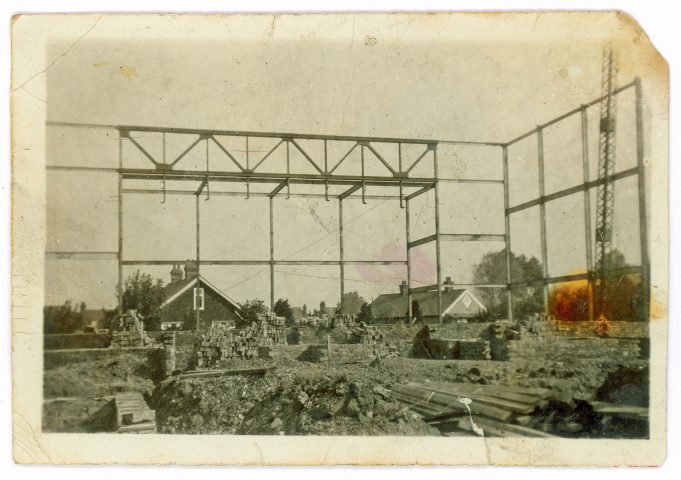 At the grand opening the invited personality was the sister of Gracie Fields, Miss Betty Fields, an actress who appeared in a few films. On this occasion the famous Compton organ which David believed cost £6,000 to buy, supply and fit (although he found it hard to believe) was played by Peggy Weber, a very young organist.

The Rolls also built several parades of shops, with accommodation above, in the Southend area including the Kingsway Parade in Hadleigh on the opposite side of the road to the cinema. Mrs Rolls being an ardent royalist insisted on the name Kingsway for the parade.

The Kingsway ballroom was on the first floor positioned across the front of the property to the rear of the first floor auditorium. The cinema could take 1,400 people including over 500 in the very large dress circle. The ballroom was probably about 40 feet wide by the width of the building. David recalled the sound system was brilliant but the heating was always a problem and there were complaints about the cold. 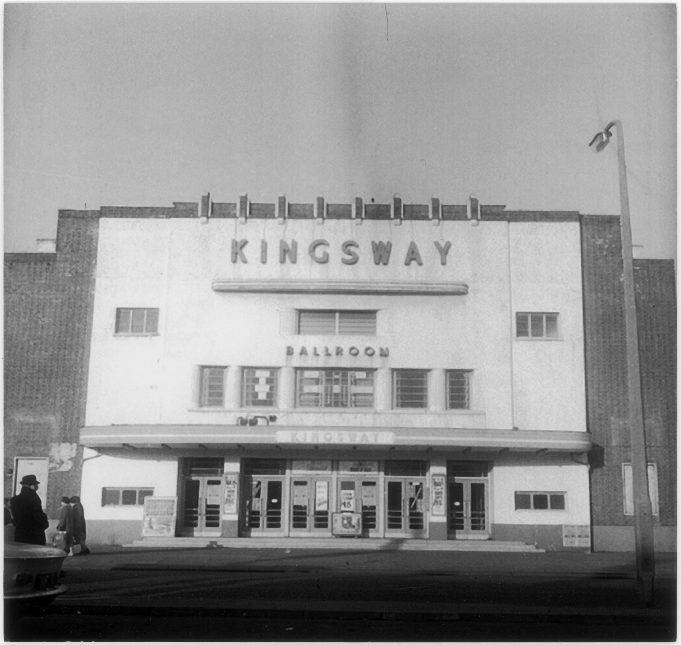 The Kingsway Cinema in all its glory.  [The collection of David Dedman]

The cinema continued comfortably until just prior to the war at which time it was leased to ABC at a fixed rent for 21 years. 1955 saw a major innovation when Cinemascope was introduced to the Kingsway, the opening film being Sign of the Pagan starring Jack Palance. Mrs Rolls took only a passive interest in the cinema until 1959 when ABC’s lease ran out. In 1961 the Kingsway was refitted and re-opened for which special occasion Peggy Weber returned to play the organ. Sadly, from 1961 as a cinema it did not generally attract large audiences and the business haemorrhaged badly. On one occasion David and his brother sat in the cinema watching a film on their own. This is the point when other attractions were tried.

A Tony Charles brought all-in wrestling to the Kingsway on Friday nights. It ran very successfully for four years. It was very popular and the word spread widely. Occasionally Billy Walker, the British heavyweight boxer, would join the audience bringing a small entourage. Boxing was also tried but failed to attract enough of the public. Bookmaker, John Marshall, introduced pop groups and the audiences were treated to some top acts like Roy Orbison, Julie Felix, The Who and The Kinks. The Rolling Stones were rejected because they expected to receive 100% of the take. On reflection, to have billed the Stones would have put the Kingsway on the map for a much wider audience than it was used to. A Talent Competition was tried during the 1960s which proved quite popular and lasted two or three years. Harry Denis, a theatrical agent, put on an Old Time Music Hall three or four times in the 1960s. David remembers that the chairman, Hal Brian, was splendidly theatrical and to a certain extent resembled Leonard Sachs. Later in the 1960s a man took a lease to show “x” rated films but that did not last long. The inevitable Bingo, which took over so many cinemas, ran from 1961 to 1968.

Gus Keeling was the manager in 1959 inherited by the Rolls from ABC. He was already in his tenth year as a very successful manager and became very popular with the Rolls family. One startling incident took place one evening as he locked up and was leaving for home. A man accosted him threateningly. As the man tried to push past, Gus whacked him on the head with his torch, knocking him out and then called the police. When Gus died Brian Fenning took over as caretaker manager.

The Rolls family certainly did not make a fortune from their cinema in Hadleigh. The income from these various additional events was split, the Rolls receiving all the profits from the café with its hotdogs and tea stall. There was no bar and no alcohol because Mabel was a teetotaller and had taken the pledge. With a bar the whole business would probably have been more successful but Mrs Rolls was a woman of principle.

The Kingsway closed in 1968. The next year £100,000 was offered to the Rolls for the property but was rejected. Safeway were luckier in 1970 when their offer of £90,000 was accepted. All the funds for the sale of the Kingsway were subsumed with paying off debts, capital gains tax, betterment levy and corporation tax that were extremely high in the late sixties and early seventies. Every penny was swallowed up.

So not a particularly happy epitaph for the owners but what enormously happy memories cinema-goers of a certain age still have!  Try putting “Kingsway Cinema” into Search on this website and I am sure you will be staggered by the number of articles and comments available.

How to search: click “Search” and a space will appear for you to type “Kingsway Cinema”. Then press your “Return” key once, and pause to let the results show.

{Ed: Here is the link to Alice Chafer’s article and excellent photographs.}