You are here: HomenextMain SubjectsnextTransportnextRailway photography at Hadleigh in the 1950s and 1960s

Railway photography at Hadleigh in the 1950s and 1960s 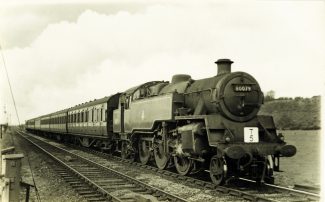 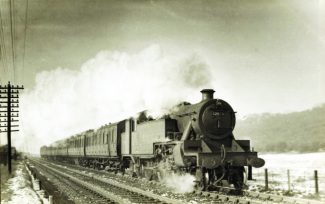 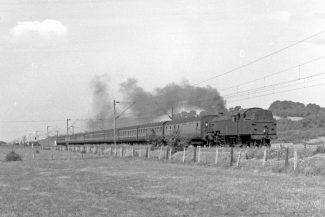 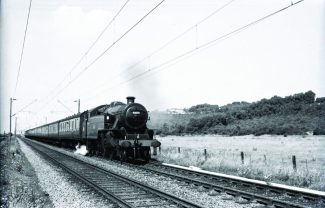 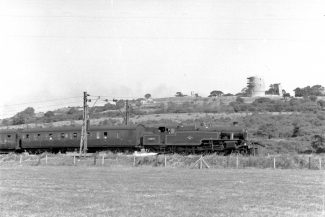 The London Tilbury and Southend Railway opened as far as Leigh-on-Sea on 1st July 1855, forever dividing Hadleigh Marsh in two lengthwise. Nearly all trains were hauled by steam engines until the last one ran on June 16th 1962. The electric trains then took over, their overhead posts and wires further blotting an otherwise pastoral landscape. Trains crossing Hadleigh Marsh were rarely photographed as it was a rather remote spot at the time, and the trains were relatively uninteresting, even for enthusiasts. Very few photographs have ever appeared in railway books and magazines. The only three known photographs of Hadleigh signal box appear in another article under Transport.

Photo  “A” was taken by my father Hugh Seaman on August Bank Holiday 1954. The engine is new, being only six months old, but the carriages are of 1930s vintage. In 1958, this engine was in a crash at Dagenham that killed ten people, but is now preserved.

Photo “B” was taken by Hugh Seaman on a hazy snowy February afternoon in 1956. He was clearly standing inside the railway fence, but no one minded then as long as you were sensible. Although no public footpaths crossed the line below Hadleigh, there were several agricultural accommodation crossings, and the use of these by ramblers to get to the sea wall (and my photographers) was tolerated until around the 1980s. As I recall it, the signs did not forbid crossing, but in pre-Country Park days you were of course already trespassing by being off the east-west public footpath. The photograph shows a typically grimy train hurrying eastwards, with Benfleet Downs in the background. Note the plentiful telegraph wires that disappeared in 1961.

Wide angle photo “C” taken by Brian Pask on 31 August 1961. The railway was generally very run down at this stage, as electrification had been delayed, and serious staff shortages meant that locomotives were rarely cleaned. My recollection is that all of Hadleigh Marsh was pasture at the time. This must have often involved moving cattle across the line, and other people’s memories of doing this would be interesting. The Downs are in the background and the brickworks bridge abutments are in the far distance.

However, not all engines were caked in soot and grime as this July 1961 photo “D” by Hugh Seaman shows. This one has been newly painted, although it will soon to be displaced by the electric trains which took over completely on Saturday 17th June 1962.

A broadside photograph “E” taken by Brian Pask on 31 August 1961. The castle is under scaffolding in the background. Hurrying towards Leigh, the engine and carriages are about ten years old, but will soon be scrapped. A child leans out of the window, as we all did then, keen to see the sea for the first time.