From "The Buildings of England: Essex" 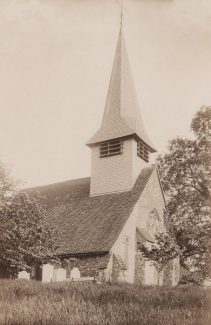 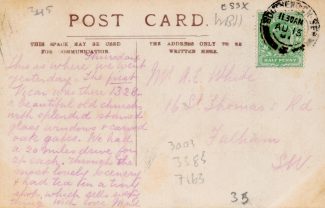 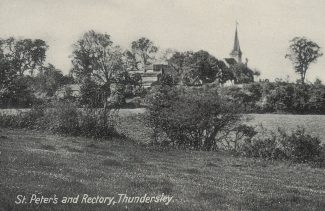 zoom
After the harvest, the rectory and distinctive broach-spire of St Peter's in the background
H&TCA 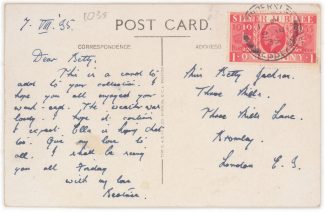 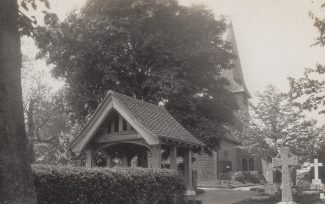 Pevsner’s  summary ( 2nd Edition, 1965) of St Peter’s Thundersley included:
“On a hill with wide views around. Small. Nave and aisles under one big steep roof.  The eaves no more than nine feet from the ground. Chancel of 1885.  Belfry, shingled, with broach-spire.  Immediately behind the large three-light Perp West window with panel tracery the timber substructure of the bell-turret, not one of the more impressive ones.  The arcades of North and South aisles are of the first half of the C13.”      {Ed: a partial glossary is in a footnote.}

Here are some of the excellent images made, distributed and used as postcards during the 20th Century.

The first picture looks up at St Peter’s Thundersley on a card posted with a half penny stamp showing Edward VII printed between 1904 and 1910.  The written message shows Thursday; and the date of the cancellation shows 15th August  which was a Thursday in the year 1907.
The message reads:
“This is where we went yesterday.     The first Vicar was there 1328;   a beautiful old church with splendid stained glass windows and carved oak gates.
We had a 20 miles drive for 2/- each through the most lovely scenery and had tea in a tiny shop which sells everything.   With love,  Maud.”

The second picture shows St Peter’s “on a hill with wide views around.”   The back of the card contains a George V Silver Jubilee 1d postage stamp (locally franked 8th August 1935).

The Silver Jubilee of George V and Queen Mary, held on 6 May 1935 marked 25 years as the King of the United Kingdom and the British Dominions, and Emperor of India.
Every child born in the UK on Jubilee Day was given a special silver commemorative cup.  A silver crown coin was struck by The Royal Mint.

A magnifying glass used on the original of the third picture reveals the famous Reverend Maley’s name on the notice board and various memorial stones are legible, including Mary Crawford’s.

The splendid memorial lych gate had survived its first decade but is in need of a small repair to the moulding above the gun-metal inscription plate.
The healthy-looking horse chestnut tree is in flower (so it’s about late May,)  the nearer tree is a lime.

Pevsner Glossary:
Broach spire: starting from a square base carried into an octagonal section by means of triangular faces.
Perp:  Perpendicular = historical division of English Gothic architecture from c.1335-50 to c. 1530.