You are here: HomenextMain SubjectsnextOrganisationsnextSalvation ArmynextA Salvation Army Gravestone in the Church of St James the Less, Hadleigh

A Salvation Army Gravestone in the Church of St James the Less, Hadleigh

As you cross the road northwards by the pedestrian lights on the westbound carriageway of the A13, look over your left shoulder and, quite close inside the hedge round St James the Less, you will see a rather weary looking, tall gravestone showing the ravages of time. It is in memory of those who have passed away while living or working on the Colony  – or as the Salvation Army says ‘ Those who have fallen by the wayside…..’

On closer inspection, you will notice that it is a two-sided gravestone. On one side it confirms that is was erected in 1900, but a lot of the other detail is missing. However, fortunately a photograph in an early  Salvation Army publication gives the full list of names, one person noted as interred in Leigh, it reads;

I wonder what the “Women’s Sewing Guild’ was and their connection to this gravestone?  Do we still have such a group in Hadleigh?
On the side facing the hedge you can make out the date of 1912 with the wording;

THE SALVATION ARMY LAND AND INDUSTRIAL COLONY CONTINUATION OF NAMES OF COMRADES WHO HAVE FALLEN BY THE WAYSIDE SINCE THE OPENING IN 1891.

Here the list of names is quite legible where the plastering hasn’t fallen away, but still not a complete list and on researching, a photograph of this side, taken early on, has not been discovered.

ERECTED BY COLONEL DAVID LAMB  Governor of the Colony
David Lamb, appointed at the age of 32, was the youngest ever Governor (1898-1903) of the Hadleigh Farm Colony.  His wife for 24 years, Minnie Clinton Lamb, served as a Poor Law guardian and probation officer for Southend-on-Sea and a JP.
She opened Millfield Children’s Home in Prittlewell, where on the site today is the Salvation Army Bradbury Care Home.    They had five children, two boys and three girls;  two of the girls became Salvation Army officers but their elder son died in manhood with heart failure while the younger son died in action in WW1.

Lamb managed the first two of the three stages of Booth’s emigration programme and was described as one of those rare social officers, a great organiser and most distinguished officer during his lifetime. He was the chief architect of the Salvation Army nationwide emigration scheme and  toured extensively for the SA in Australia, Canada, New Zealand and South Africa. He died in 1951, his wife died in 1938. 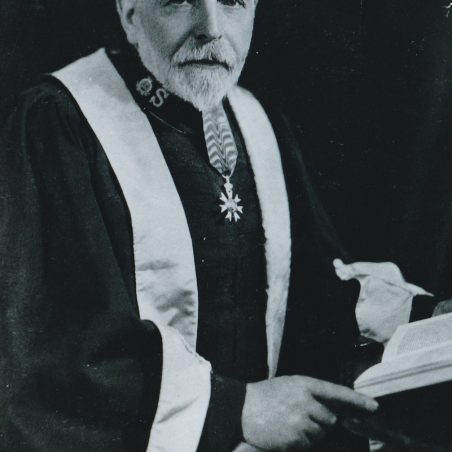 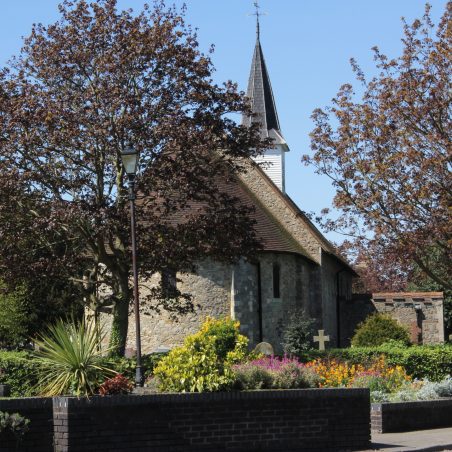 A nice blue sky for this current picture of St James the Less Church, Hadleigh. The gravestone in this article is just inside the hedge to the left.
Graham Cook 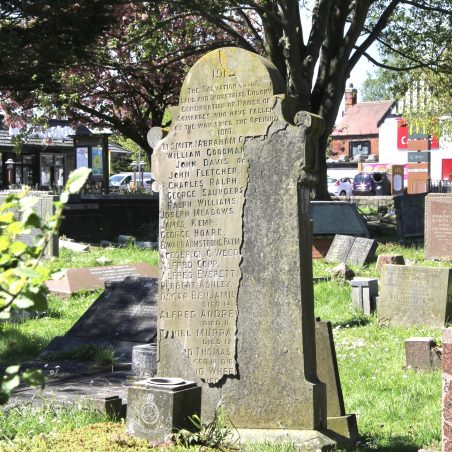 This side of the gravestone was dated 1912.
Graham Cook 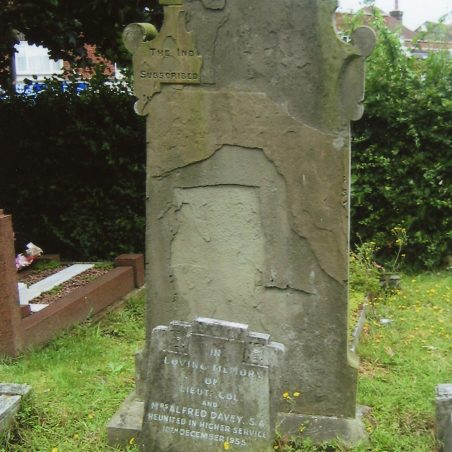 This side of the gravestone is dated 1900. Most of the information has now crumbled away.
Graham Cook 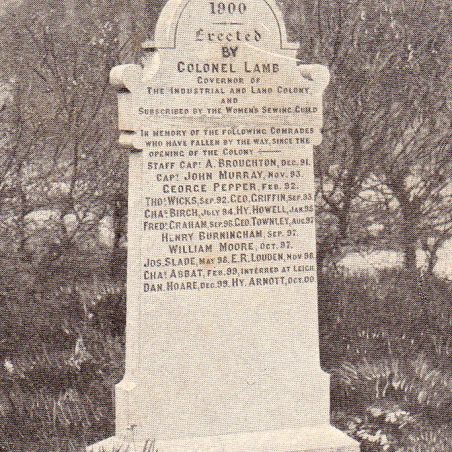 Fortunately this photo was taken early 1900 and shows the first side, the names are very clear.
Salvation Army archives 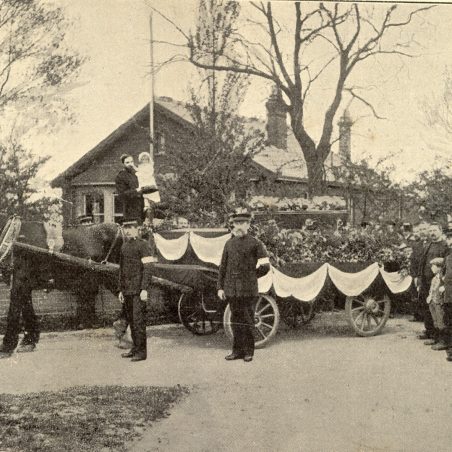 This scene outside the Colony Head Office at the corner of Park Chase shows David Lamb holding a child with the funeral cortege of Colonel James Barker. May 1901.
Graham Cook Collection 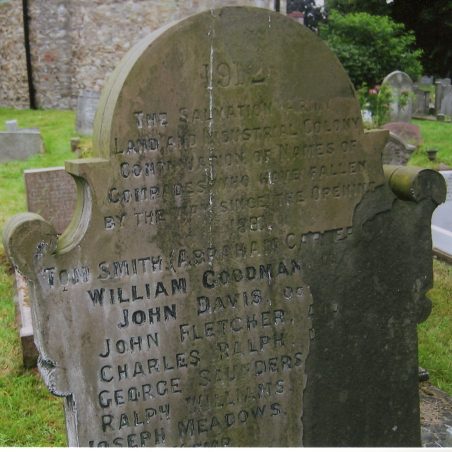 A close-up of the 1912 side of the gravestone.
Gr sham cook 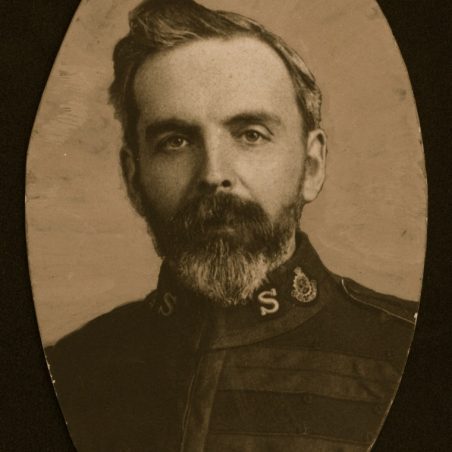 A young Colonel David Lamb about the time he was at the Hadleigh Colony.
Salvation Army archives. 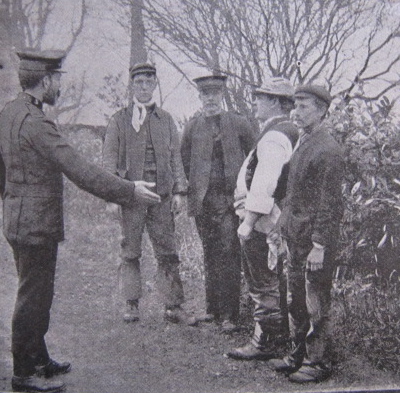 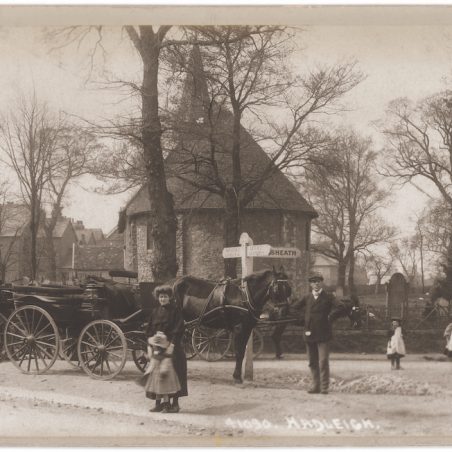 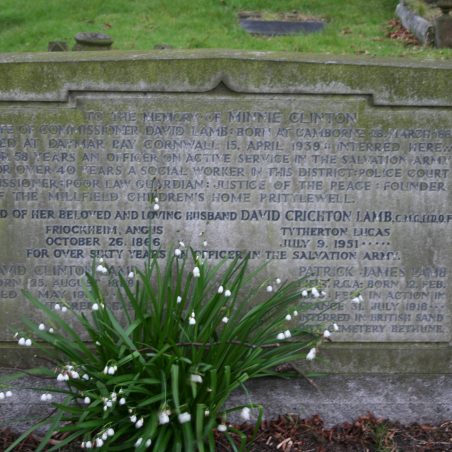 The Lamb family grave can be found in Leigh Cemetery, it is a very informative gravestone.
Graham cook