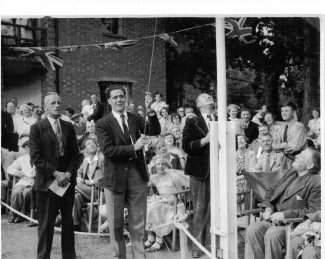 Hadleigh & Thundersley Cricket Club was founded in 1946 following the amalgamation of two local clubs who had played in the area before the 2nd World War.  After using temporary changing facilities as well as Solby’s House for this purpose between 1946 and 1953, a pavilion was built which became the new home for the club. It remained in use until a fire destroyed it in 1971.

The picture shows the late T. (Trevor) E. Bailey CBE (Essex and England) as an honoured guest of the club raising the club flag to mark the opening of the new pavilion in John H Burrows Recreation Ground on Rectory Road, in August 1953. In attendance are Eddie Jeans (left) and Jack Sheavill (right.)

A cricket match between H&TCC and a Southend and District Cricket Association XI was played on the day in front of a large crowd and T. E. Bailey played a cameo innings to mark the occasion.