Hadleigh: A step back in time: first pace.

I was born in 1935 and my parents moved to Hadleigh in 1939 just prior to the outbreak of WWII.   I spent my entire childhood in Hadleigh during the war years and thereafter up to the age of 15 and wish to share some of my fond memories with you.

Hadleigh offers a unique charm, I was very happy living there and got to know the area extremely well.  First, we lived in rented accommodation “Leafdene” a bungalow near The Woods just off Scrub Lane and then in a bungalow in Arcadian Gardens “Louisa” now No. 19.

My parents had the choice of two bungalows,  both in Arcadian Gardens: “Multiflora” and “Louisa” that were up for sale;  choosing “Louisa”.   We learned that it had previously been used as a nursery school and altered by taking down the dividing wall between the lounge and adjoining bedroom making one large room into a classroom.

The school, run by Miss Howship, realised that they needed more space and moved into a much larger semi-detached house “Bonchurch” (now No. 15) two doors away and set up school there.   On retirement, Miss Howship spoke to my mother and gave her many school
books such as geographical magazines which she thought would be useful for my education.

Hadleigh had many shops and was well served with other essential services and as such was a self-supporting village.

Hadleigh Primary was a small school but was nevertheless well maintained with regular painting of the buildings by painters Dowling of Rayleigh.

[Ed:  See also the article on the History of Hadleigh School ]

Each morning we had assembly held by Mr Tutt telling us about school matters and of any school forthcoming events, finishing with a hymn.

Mr Lambourne was my favourite teacher,  making every lesson exciting and challenging; he particularly impressed me when taking poetry class explaining that poetry can show things in a very explicit way.

One example that has always remained with me was a piece of prose taken from A Tale of Two Cities written by Charles Dickens :
“Far and wide lay a ruined country, yielding nothing but desolation. Every green leaf, every blade of grass and blade of grain, was as shrivelled and poor as the miserable people. Everything was bowed down, dejected, oppressed, and broken. Habitations, fences, domesticated animals, men, women, children, and the soil that bore them—all worn out.”

Mr Lambourne explained that in this short piece of prose by showing imagination you can immediately relate and visualise the situation. An example of a snippet from poems he also demonstrated was :

Across the bridge, Lord Marmion rode;
his scar on his right cheek revealed
a token true of Bosworth field.*

{* Ed:  Marmion: A Tale of Flodden Field by Walter Scott

Along the bridge Lord Marmion rode,
Proudly his red-roan charger trode,
His helm hung at the saddlebow;
Well by his visage you might know
He was a stalwart knight, and keen,
And had in many a battle been;
The scar on his brown cheek revealed
A token true of Bosworth field;.. }

[Further sections of Mr Thorn’s Steps Back in Time have been released. To see more of Mr Thorn’s tales of Hadleigh, click on this link for the second pace – Ed] 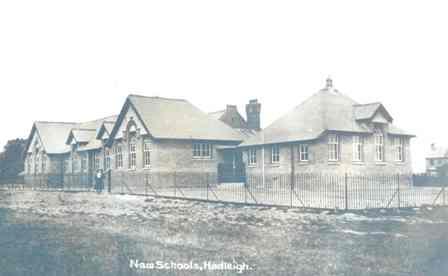 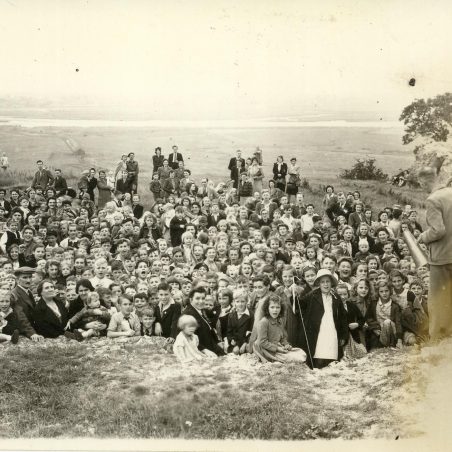 Mr Tutt using a megaphone to address his pupils at the castle on VE or VJ Day
Downloads
(3 MB Adobe Acrobat document, opens in a new window)