In stone on George Street, Nottingham - The Architect of the Hadleigh National School 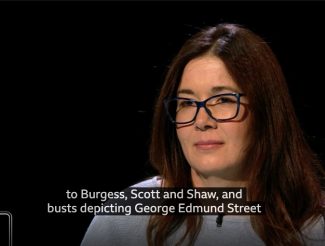 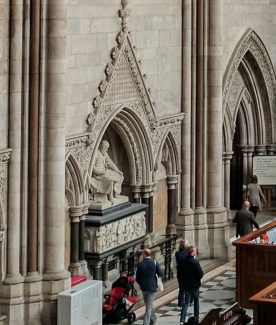 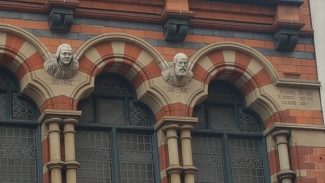 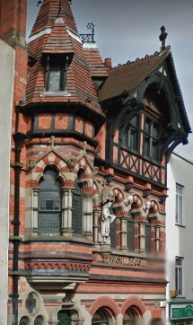 About nine minutes into Episode 9 of Mastermind 2019/2020, there were the magic words “George Edmund Street.”

The contestant was answering questions on the specialist subject of Watson Fothergill.
Of course,  we know (from Wikipedia [Ref 1]) that Street was married on 17 June 1852 to Marquita Proctor.

They met when Street was employed to restore the church at Hadleigh, in Essex, where the rector was Marquita’s uncle.[Ref 2]

George Edmund Street RA (20 June 1824 – 18 December 1881) was an English architect, born at Woodford in Essex.
Stylistically, Street was a leading practitioner of the Victorian Gothic revival. Though mainly an ecclesiastical architect, he is perhaps best known as the designer of the Royal Courts of Justice, on the Strand in London.
It is in that august building that the pictured monument to Street is situated.

On the right, there is George Edmund Street with a stone head and shoulders bust, almost life-size, placed as a corbel of the window arch.
A bearded gentleman, a little thin on top, wearing what looks like a suit contemporary with the period. {The bust on the left is Pugin.}

What is less obvious is that these famous offices, with their tribute to both Augustus Pugin and George Edmund Street,  are in George Street, Nottingham.