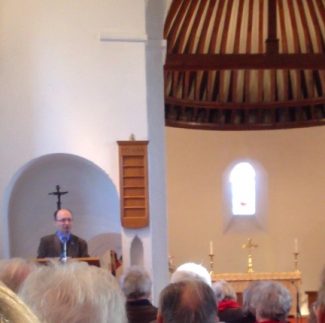 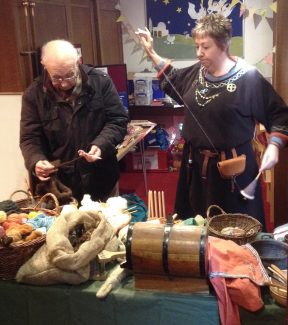 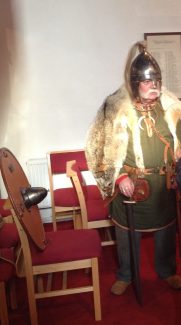 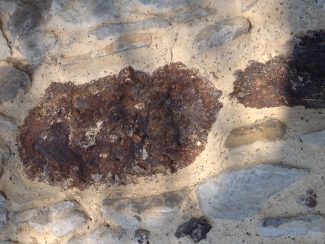 Saturday 21st January 2017: Reverend David Childs gave a talk in St James The Less on Saxon and Norman Hadleigh;   one of the series of events sponsored by the Hadleigh Heritage project.

After the Romans left, their access through the Thames was blocked. Saxons arrived and then Christianity arrived  in at least two waves;  first St Columba but Essex was resistant. Then 50 years later St Cedd worked through Othona with the help of St Ethelburga, daughter of a noble family in Kent.

David spoke persuasively on the long history of trade between peoples and lands, noting that cultural and spiritual development over the centuries from 5th to 12th was mostly peaceful.  The Norman invasion was implemented in Essex by as few as 250 Normans seizing the lands and supplanting Saxon nobility. Even the most damaging fighting was between Norman nobles, Stephen and Matilda.

Hadleigh started as the eponymous clearing in the forest, between the woods and the water.  Originally it was likely to have been an oval or elliptic clearing, accumulating 30 layers of burials for the period of Saxon Christian tradition. This culminated with the building of a church which was eventually rebuilt and fortified with Kentish ragstone floated across on rafts from Kent.  The significance of ….

were all woven into a compelling narrative which however would benefit from further supporting evidence.

David took a range of questions and concluded by highlighting the significance of the northern stained glass windows which feature St Cedd and St Ethelburga  in memory of their key role in bringing Christianity to Essex. The congregation/audience showed their appreciation of this well-attended and interesting presentation as a further step in the Hadleigh Heritage project.

Following the presentations, we saw demonstrations of Saxon technology, included wool carding, spinning and dyeing with locally obtainable dyes obtained from nettle, beetroot, saffron,  woad, and oak galls, to name but a few of those brought by AJ.  Ken and Linden Rochester and AJ all wore appropriate Saxon attire.

Ken Rochester demonstrated a Saxon-style leather shield,  leather accoutrements and other Saxon essentials much of which he had made himself.  Implements of the style of the period, including handy knives and the swords popular across Europe were also seen. Ken described the process of locating, refining and processing an inferior iron ore known as bog iron, without the advantage of later high temperature furnaces.  His largest demonstration sword was in the style made famous by Ulfbehrt of the Rhineland and similar craftsmen between the 9th and 11th centuries.