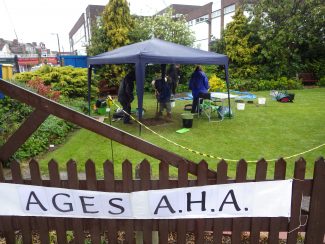 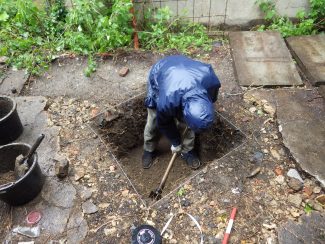 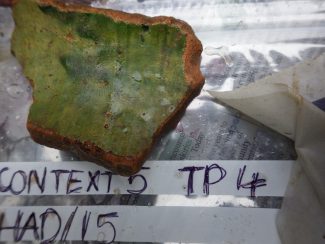 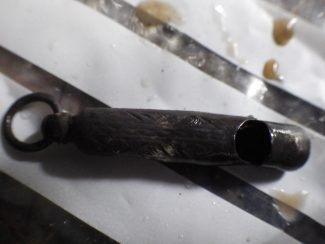 On 13th and 14th May, under the direction of Dr Carenza Lewis for Access Cambridge Archaeology, 11 test pits were dug around Hadleigh seeking information about the development of the medieval village.

AGES AHA dug 2 pits and acted as co-ordinators to find 9 local residents happy to have teams of 4 Southend Schools students digging a hole in their gardens over the 2 days.

A day of sunshine was followed by a day which finished with heavy unrelenting rain.

In the Church pit, AGES found a very compact layer of pebbles about 350mm (14 inches) below ground with Roman pottery above and below. Carenza Lewis said that this could be the Roman equivalent of the modern A13 (or “the AXIII”), but there would be much more work and evidence required to make a convincing case for a previously unsuspected Roman road. However, plans are already under way for a probable return of the project to Hadleigh to carry out a similar number of test pit digs in 2016.

Finds from the student pits ranged from a 4,000 year old worked flint in the Rectory garden to a Victorian toy whistle in Oak Road South.

All the finds were taken back to Cambridge and dated by Paul Blinkhorn, a medieval pottery specialist.

Overall, we had hoped to find Saxon pottery to prove people lived in Hadleigh prior to the building of the castle, but none was found at the depths reached over the two days. However, Roman pottery was found in pits in Castle Lane and Church Road indicating an even earlier settlement in Hadleigh than previously thought.

Although all the pottery from the Rectory garden was Victorian, a piece of prehistoric worked flint indicated the presence of man in the area some 4,000 years ago.

From the time after the castle was built in about 1215, there was evidence of pre 1400 AD medieval pottery from 5 pits centred around Castle Lane and as far afield as St John’s Road near Chapel Lane. By the time of the Victorians, there was evidence found in every pit as Hadleigh had expanded and the dig overall turned up nearly 300 pieces of Victorian pottery over the eleven pits.