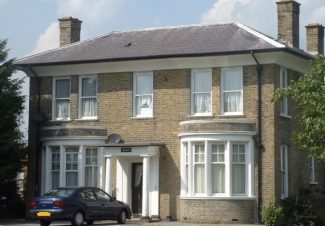 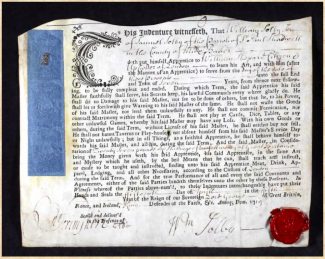 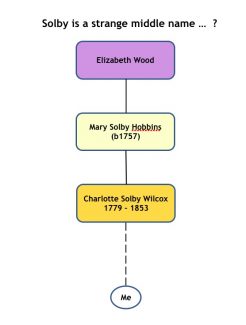 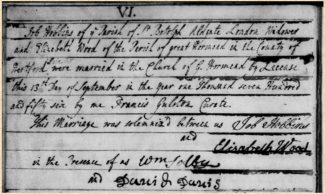 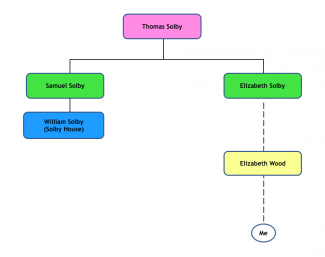 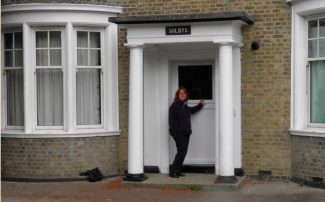 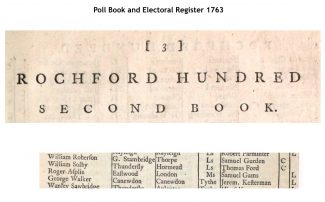 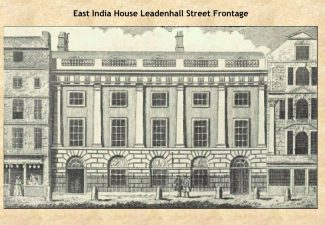 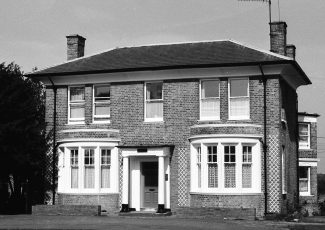 zoom
and back to Solbys House

This fascinating talk summarised some of the fruits of research across generations of the Solby family, tracking the Solby name through daughters and links with families both inside and outside the UK.  This article focuses on the William Solby who built Solby’s; the beautiful house in Picture A.
Janet Haworth,  a descendant of the Solby family, shared the research effort with her cousin, Margaret McLauchlan, from New South Wales, Australia. They’ve never met face-to-face but exchanged e-mails about the Solby family for several years.
The wider story starts in the early 1600s and ends in the 1760s, a period of rapid growth in maritime trade which offered expanding opportunities for enterprising merchants like William Solby.  “Although we haven’t located a baptism for him as yet, we’ve found his family lived in Shadwell (then in Middlesex) in London.”
Picture B is an Indenture document signed by William Solby {born 1701} in 1719 for a seven year apprenticeship as an Upholder*. The cost was 27 Pounds and 6 shillings (perhaps two thousand pounds in today’s money).
We next heard how Janet Haworth become engrossed in researching William Solby and the Solby family.   “In my family tree {Picture C } was a lady born in about 1779 called Charlotte Solby Wilcox.
She ended her days in the early 1850s in an almshouse in Stepney for merchant’s widows falling on hard times.  Her elder brother Richard is my cousin Margaret’s ancestor.
Charlotte’s mother Mary also had Solby as her middle name – she was Mary Solby Hobbins – her mother, Elizabeth Wood, is my 5 times great-grandmother.  This made me curious. Why did both women have this strange middle name of Solby?

Delving further, I discovered that William Solby signed as a witness {Picture D – The Wedding Record} at my ancestor Elizabeth Wood’s wedding, in 1756, at a place called Great Hormead in Hertfordshire.”

Janet then displayed Picture E – the family tree, and continued:  “From researching William Solby’s will and various other Solby records my Australian cousin Margaret and I believe we have now traced our link to William Solby through his Aunt, Elizabeth Solby.

This William Solby of Great Hormead mentioned his property and land in Thundersley and Hadleigh in his 1761 will.   I googled William Solby of Hadleigh and up popped Solbys House!
I called your local library and they put me in touch with local history expert Bob Delderfield, who was kind enough to take myself and my husband to see the house.”
Picture  F shows Janet “outside the family seat”.  It seems possible that the house was built sometime around the mid to late 1750s.
William died in 1765, in the reign of George III.

Picture  G shows William Solby’s entry on the 1763 electoral role for Rochford Hundred.  ” It shows that he wasn’t living in Solby House, but leasing the property to a Thomas Ford.   Clearly William was a man of means.  So how did he obtain his wealth?
We know that he started out as a young man as a Baker’s apprentice but this doesn’t necessarily mean that he followed his father Samuel’s trade.

The foundation of the Solby family – the previous generations and where their wealth came from –  is covered in a companion article about the extraordinary life and times of William Solby’s ancestors.   William Solby’s will mentions his personal estates being in the hands of the Honourable East India Company.
This could perhaps have been some of the source of his income enabling him to build Solbys and buy the surrounding land.
At the time, The East India Company accounted for half the world’s trade. and East India House, the company’s headquarters, Picture H  shows East India House in  Leadenhall Street (the frontage shown here) in the City of London.

William married quite late in life to Philadelphia East in 1751, when George II was on the throne. Philadelphia and William didn’t name any children in their will. Philadelphia’s family had lived in Great Hormead for several generations and were saddle makers and landowners.   William Solby’s sister, Elizabeth, and her husband Thomas Mottley, we don’t think had children, and so this would have benefitted William financially. We know from a land and tenancy exchange document held at East Herts Archives that William Solby, as her heir, obtained land from Elizabeth in 1750, a year before he married.

William only inherited £10 from his father Samuel. His mother Mary died shortly afterwards and she left William £800 in her will (worth about £95,000 today – and probably with more purchasing power). We know from documents on ancestry.co.uk  that William Solby also obtained some money from his brother Samuel Jnr, who died intestate in 1751.

William Solby’s will was probated after his death in 1765. He was most likely around 60 when he died, a good age for those times. He must have had a strong bond with his brother (Samuel Jnr). In his will William asked to be buried at Great Hormead as near to his brother as possible but he  died in Shoreditch and was buried at the Church of the Sea Captains – St Paul’s, Shadwell.  Janet’s hunch is that William Solby had been involved in sea travel – he married quite late in life, which was often the case for seafarers; had come  from the Sailor’s Town of Shadwell and he built Solbys where he could perhaps, in those times, view the ships going back and forth to sea at the mouth of the Thames.

William Solby made sure that his family were cared for after his death. He didn’t name any children in his will but there were bequests to his cousins and godchildren: one young goddaughter being Mary Solby Hobbins, my 4 times great-grandmother.  His property in Thundersley and Hadleigh (which would have included Solbys) was to be sold after his wife’s death and the money to be divided among his young Wood cousins (they were most likely my 5 times great-grandmother, Elizabeth Wood’s, brothers and sisters).”

Janet continued:  “Bob recently sent me a copy of a document referring to the sale of Solbys and Solby Wood in 1784, the year of Philadelphia’s death. Some of the legatees mentioned in William Solby’s will, my family’s distant relatives, were still alive to inherit the money from the sale of Solbys and Solby Wood, as instructed by him nearly 20 years earlier.   The house was next bought by Jonathan Wood who owned Solbys in 1847. I believe it’s unlikely that Jonathan Wood and the Wood family of Hadleigh are related to my family’s Wood relatives, William Solby’s cousins, but family research can sometimes throw up surprising things – and our research is still ongoing!”

It had been an illuminating evening, and clearly there is more to hear about the Solby family and the house that bears their name.
Here is the companion article about other members of the Solby family.)


{*Ed:  Upholder was the contemporary term for an upholsterer.}

If we have inadvertently used an image with copyright restrictions, rights holders are invited to contact the Archive for a full acknowledgement and attribution.