Holding on to history 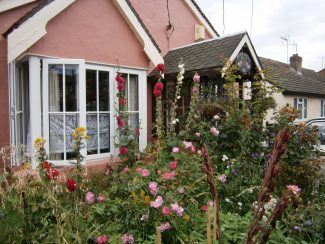 Our property was built circa 1925 on Plots 264 and 265, two of an original holding of four (the others being 266, 267). We are the sixth family to live here – the others being Gregory, Connor, Woodford, Knowlton, Fry. These were four of the plots sold off when the Manor House (Thundersley Hall) Estate was sold off in 1897 by Robert Varty, acting on behalf of the Bosanquet family.

We bought the dwelling in 1974 as a derelict, and extended it by two rooms in 1985 – the original was four rooms only with no hot water system, a dilapidated lean-to, and an outside toilet. The old part still has earth foundations only.

It has been a labour of love, and we certainly will never move from here. These old plotland dwellings are going down like ninepins in the modern obsession with bigger and better.