You are here: HomenextMain SubjectsnextBusinessesnextC. S. Wiggins - the early days

The man who built Thundersley 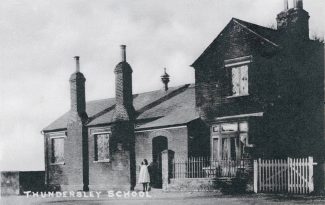 zoom
The old Thundersley School, Church Road. Fees were a penny a week. Stan was four when he first went here. The first day the teacher kissed him but on the second day he had the cane. 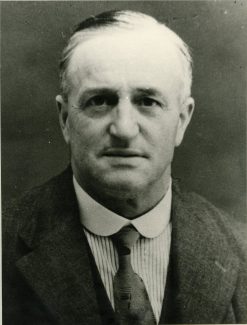 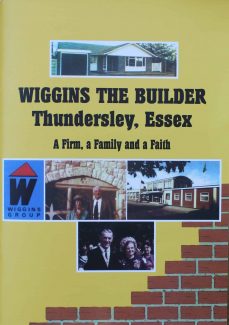 Thundersley village has (of course) an ancient history, but its urban development throughout the Twentieth Century was influenced to an extraordinary extent by the vision and energy of one man and his two sons: that man was Claude Stanley Wiggins.

C. S. Wiggins & Sons developed much of the land along Hart Road including the shops in “The Village” and at the “Woodmans”, and the Raymonds Estate.

The following is extracted and adapted from the opening page of the rare and definitive history written by his granddaughter Gwyneth Craze and self-published in 2004 under the title, Wiggins the Builder, Thundersley, Essex – A Firm, a Family and a Faith.

C. S. Wiggins (known as Stan) was born in 1882 at Kiln Farm Cottages opposite the Woodman Public House in Thundersley. He attended the old Thundersley School (which was situated at the top of Church Hill opposite where the Kenneth Road clinic now stands) until he was twelve. During this time he helped his father with farm work in the school holidays and then for another year before he was apprenticed at thirteen (1896) to Mr L. S. Upson of Hadleigh in carpentry and joinery. For about ten years he continued as a day-worker and sub-contractor, but also started a carrier business, using a horse and cart to transport goods from Rayleigh Station to outlying areas. This venture proved useful and remunerative at a time when employment in the building industry was erratic.

Stan’s parents rented Kiln Farm from 1880. It comprised about 12 acres of land west of Rayleigh Road between Hart Road and Common Lane. Here with Stan’s brother Joseph (who was eighteen years his senior) the Wiggins’ carried out a certain amount of cattle dealing, hay-making and poultry keeping. Stan took this on in conjunction with his other activities until 1918. He was often up at 5 a.m. and continued work through the day staying up late into the night to complete woodwork projects.

In 1908 Stan married his cousin Lois Anderson. Her family came from Scotland but her parents moved down to Essex when her father acted as bailiff on Potten and Havengore Islands. Later, the Anderson family moved to Barking, to work on the newly opened Becton Gas Works, and named their new home “Havengore”.

After leaving school Lois was apprenticed in dressmaking but later became a “Nippy”, which is what the waitresses were called in Lyons’ Tea Rooms. She worked in the first one to be opened in London in 1845 and Joe Lyons himself would sit in the corner each afternoon to see that the girls did their job properly.

Stan chose a site near his birthplace in Rayleigh Road to build their first home, which they called “Braemar”. This is still standing (albeit greatly altered) on the northern corner of Deerhurst (459). Lois was surprised to find that there was neither gas nor electricity and that the water supply was just a tap in the kitchen. She had been used to electric lights in her parents home in Barking so still often put her hand to the wall, searching for the light switch! There were other surprises too for a girl brought up in a town, such as when she came home one day to find that her husband had left some live eels in a bucket in the kitchen – but they had escaped and were slithering up the stairs. Quickly, she shut the door and waited for Stan to come home to deal with them!

Gwyneth Craze (née Wiggins) died on 2nd June 2018 at Abergavenny. Her book, “Wiggins the Builder, Thundersley, Essex– A Firm, a Family and a Faith” sold out in her lifetime, the last few dozen copies having been kindly donated by her to our archive.  We found a buoyant market for them amongst old Wiggins employees and folk who enjoyed living in Wiggins Homes.

After our tentative approach in 2020 to the family about the possibility of an H&TCA-sponsored reprint, Gwyneth’s husband, Bill, most generously arranged for the production of a limited edition of 60 copies, which he donated to the Archive as a tribute to his late wife.
As of May 2021, a few of these rare and precious copies are available, whilst stocks last, via this link to Essex Hundred Publications.