You are here: HomenextMain SubjectsnextBusinessesnextThe Shop at the Top of the Hill

The Shop at the Top of the Hill

A Thundersley Childhood in the 40s and 50s 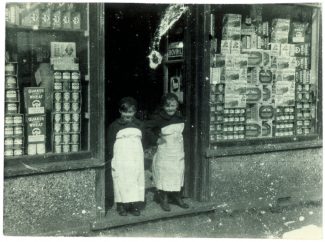 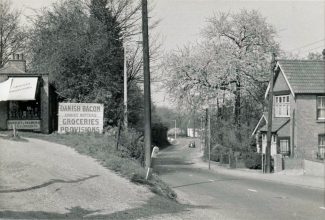 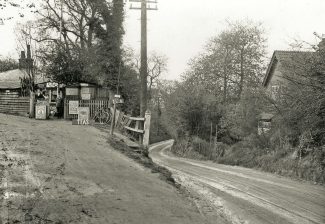 zoom
An early photo of the Thundersley Park Road Refreshment Rooms, before the Jordan's tenure 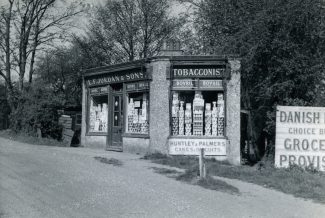 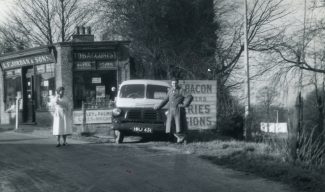 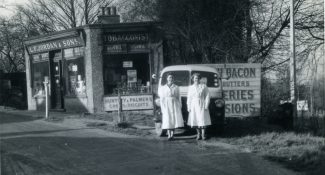 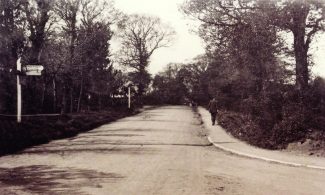 zoom
Bread & Cheese Hill from the junction of Kenneth Road 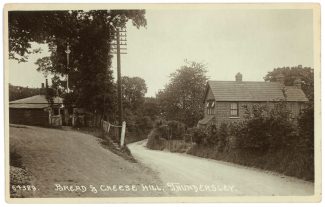 zoom
An old postcard view of Bread & Cheese Hill, long before anyone dreamed of a dedicated bus-lane!

Part of the history of Thundersley involved a little shop at the top of Bread and Cheese Hill. It was attached to a small four-roomed bungalow which still stood there until very recently, derelict and boarded up. The shop was in front of the bungalow, though adjoining. It lay at the junction of Thundersley Park Road and the A13 at the top of a steep north-facing slope that descends into Coombe Wood. Old photos show it as more of a wooden shack than the shop I knew as a boy in the 40 and 50s.

My grandfather bought the shop in the early 1930s when it was a general store and grocers. My late father took over the running of the store around 1934. It was known as Thundersley Park Stores or simply Jordan’s. It served the many travellers who journeyed from the east side of London to Southend on bicycles in the 30s and to the 50s. It also served the plotland shacks in Coombe Wood and many of the older families of the district can recall it.

Mrs Kates of Hill Road, who died only recently, told me of a strange charade she witnessed bemused as a child during the years of rationing that resulted from the Second World War when she was a Miss Copping. Her father, when shopping asked my father for some ham. (It must be understood that this was a rare commodity at the time.) My father apparently mimed the whole process of preparing some slices for him, wrapping them up and passing them over the counter. Mr Copping obligingly continued the mime and respectfully requested what he owed. They then mimed the exchange of the payment including the counting out of the change and bid each other good day.

The shop and bungalow which became the shop’s warehouse, had a wooden shed at the side with large open tanks of paraffin, a yard full of wooden boxes of vegetables and fruit purchased from the wholesale distributor “Blake,” I recall, who had a yard near the Woodman’s Arms. There was no refrigeration and dairy items had to be stored below ground level in the old “Anderson Shelter.” This would fill with water every winter and the steep slope and hosepipe introduced me to the magic of siphoning, water going uphill before going down to the A13. This was an annual event.

Bacon delivered by the Danish Bacon Company came in a large truck and my father would select the smoked half pigs called sides and take them over his shoulder to the fine mesh cage store in one of the back rooms.

There was an orchard behind the shop running about two thirds of the way to Glen Road. I recall the delight of being able to eat freely from the Williams pears, the Worcester apples, the greengages and much else. The greengages were best obtained from the roof of an old brown shed called “The Office” where the coupons from the ration books were sorted by my grandparents on their visits. The shop continued to operate as an old-fashioned type of store with biscuits served from large tins, cheese cut from large barrel-shaped blocks that arrived in pairs in wooden crates and many other items served “loose” that had to be wrapped in cunningly devised “cones” of thick blue paper. The wooden floor of the shop was covered in a thin layer of sawdust that was renewed daily. Oranges arrived in large wooden boxes each individually wrapped in tissue. I sometimes had the job of sorting them when up to half of them were blue with mould and very soft. Unmade roads were more common in the days of the shop than now. I recall Thundersley Grove as a wild track with scattered cinders and a lovely stand of Aspen trees in the lower part.

There was a footpath into Coombe Wood near the A13 end of Thundersley Grove. We generally entered the woods this way and the gardens of the houses in Thundersley Grove south of the path were part of the woods and had some of the best sweet chestnut trees. There was a small timber garage a little way down this track that housed a vintage “MG” belonging to Mr Baker who worked in the shop now called “Stellisons” when it was a chemists with many strange shaped bottles of different colours and many small drawers with the various ingredients used in those days to make up the medicines.

The Bread and Cheese Pub was merely a small house behind a wood that served as the local off licence and was run by a Mr Smith. The Pub car park was a field on two slightly different levels, evidence of its earlier use as tennis courts. Here I would play, collecting slow worms in the field and lizards from the dry bank by Mount Road where sweet briars grew. I remember my father bringing home glowworms in a jar from this field. A Mr Ransom used the field for hay and there was a hay stack where we were warned not to play in case he had left his hay cutting knife there!

There was also a part of Coombe Wood in the corner of Thundersley Grove and the A13 on the East side, where the row of houses we call the “police houses” now stand. A steamroller was sometimes housed in this wood. It was also part of the wood that we regularly played in. Part of the trade from the old shop was delivery of orders, and my brother recalls one or two customers who lived in the wood down Lake Drive. So much has changed but the flowers of my youth still bloom in the wood and now it has Village Green status we can hope many good memories will be forged there for the future and its boundaries will be more secure.