George & Frances Grimes
You are looking above at a photograph of Hadleigh High Street when it was a great deal quieter than it is now. On the left stands The Castle Inn. Just beyond that you can just make out the pub’s outbuildings. Beyond that, jutting out slightly into the road you will see a shop. Like most of the shops in the High Street it passed through many owners and tenants. On this occasion, very early in the twentieth century, it was the business of George Henry Grimes, greengrocer and nurseryman. 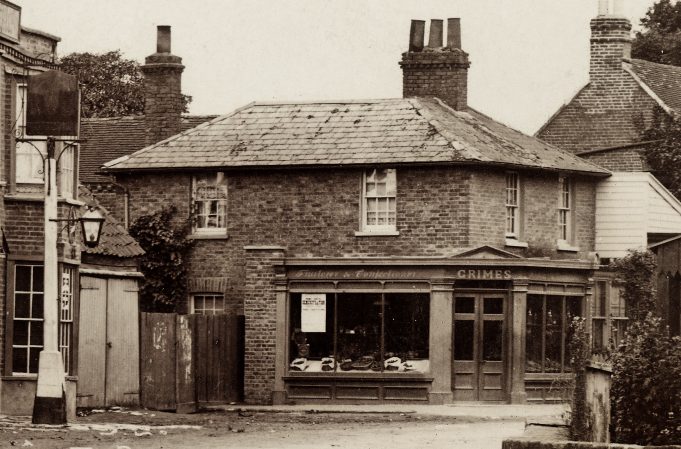 This close-up above reveals that like so many shopkeepers in both Hadleigh and Thundersley, George had more than one string to his bow. If your eyes are sharp you will spot that above the shop window directly facing us it declares “Fruiterer and Confectioner”.  It looks as though Mr Grimes apart from dealing in fruit, veg. and plants also sold sweets and similar temptations.
George, born in 1872 and a Gloucestershire man by birth, had an earlier shop on the other side of the High Street into which he had moved in 1900 when the building of the High Street Parade, as it was then known, was completed. It appears that between 1901 and 1905 George decided that he would prefer the older shop rather than the brand new one. Perhaps the size and solidity of the older building attracted him and his wife. 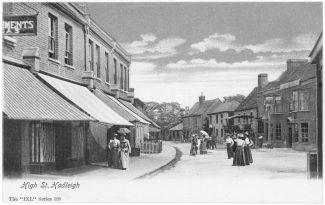 George’s parents were John & Sarah Grimes who with their family had lived in some rather grand places because John was a domestic coachman. At different times he worked at Ingatestone Hall, where the Grimes family lived-in, and Ramsden Hall where they occupied the Hall Lodge.  At the former, George’s mother, brother and sister were also employed at the Hall. Our hero struck out on his own and became at first a greengrocer. 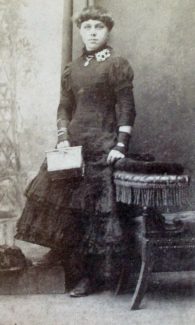 In 1895 he had married Frances Evenden at St John the Baptist in Southend. Her father, Alfred, had been a seaman in his youth but later had a variety of jobs connected with the river such as waterman although by the time that George & Frances set up shop in the High Street Parade, he and his wife, Elizabeth, were running a lodging house in Royal Terrace, Southend. 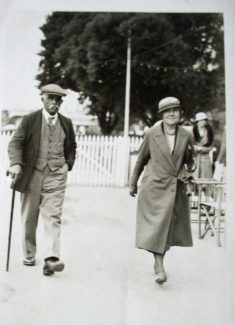 The Nursery Arises
Although the 1911 census shows George as a nurseryman we have no clue as to where he grew his plants at that stage, perhaps in the garden at the rear of the house. It would seem, however, that in August 1916 he purchased from Lewis and Louise Upson some land on the south side of New Road, Hadleigh. Here the New Road Nursery began its life. Exactly fifteen years later some orchard land to the west of the existing nursery was bought from Matilda Allen. This extension became the flower growing field. The New Road Nursery was now complete and at some point George and family moved into one of the new houses in Templewood Road, very close to his new business. 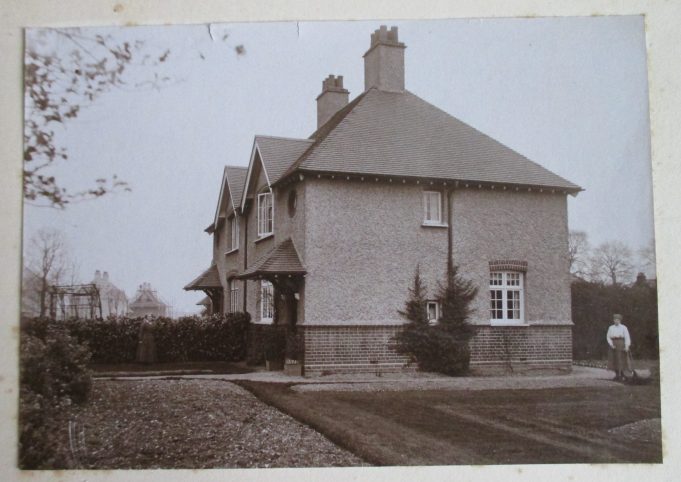 In 1924 a new road had been built to bypass Hadleigh High Street. This new road, now the Southend-heading half of the A13, has been known to Hadleigh residents variously as the London Road or The Kingsway. In 1936 the Kingsway Cinema was built and beside it was Central Garage. These two buildings hid much of the Nursery from view as did the increasing number of houses in New Road where the entrance to the Nursery lay. 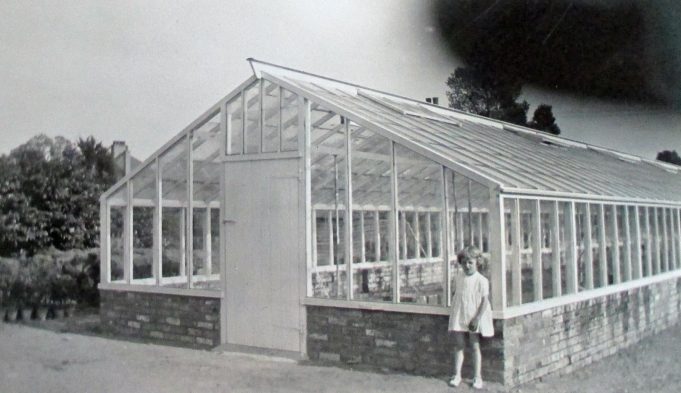 A New Road Nursery greenhouse with a young Peggy Hollis

George and Frances had two children: Robert John and Elizabeth Annie, usually called Betty, who in her turn married Harold Hollis. Their marriage took place at St James the Less in 1928. At the time Harold then aged 29 was living at The Elms, Scrub Lane as a nurseryman, probably working for his market gardener father, Robert Hollis. 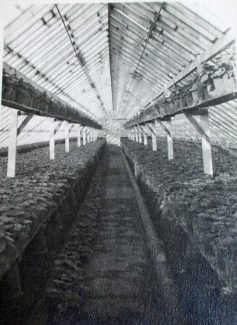 New Road Nursery: the inside of another greenhouse

When George Grimes died in 1952 he left all his freehold property, that is the Nursery and two New Road houses called “Belton” and “Kenwood”, to Betty. Frances Grimes having died nine years earlier, Robert, who by then was a motor engineer in Coulsdon, Surrey, was left everything else. George’s whole estate was worth more than £ 68,000, a healthy sum of money in 1952. Belton and Kenwood are a pair of semi-detached bungalows which still stand in New Road on the corner of Templewood Road and nearly opposite what was once the entrance to the nursery.

Harold and Betty Hollis
Thus it was that the New Road Nursery passed from the Grimes to the Hollis family. Harold was by then into his fifties and required assistance in what was a busy going concern. In late 1953 he took on Ray O`Neill, a 23 year old and newly married to Gwen Faux from the well known Hadleigh family of that name. Ray already had some experience in nursery work but stayed for a couple of years only. I met Ray recently and he told me that there was not enough money in the job for a married man and he swapped nursery work for the Southend Fire Service where he remained for the rest of his working life. Whilst working at the Nursery he and Gwen had lived at Poplar House, a tied house in New Road owned by Harold Hollis. It is one half of a semi-detached pair still standing today. The other half was once called The Poplars. I presume some poplar trees must have once been standing nearby.

Harold and Betty Hollis, like the Grimes, had two children who grew up in the middle of the nursery business. The younger Hollises were called Richard (known as Dick) and Peggy. The family lived initially at Belton in New Road but later in their nursery bungalow with its lovely garden. 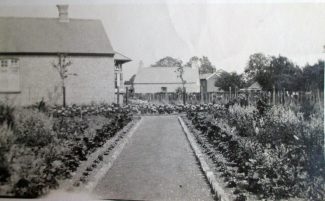 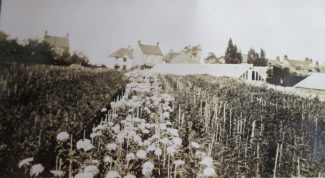 The nursery sold its plants and flowers to a large number of local florists and to private customers who also were mainly local. The Hadleigh shop which provided much of the nursery’s business was Chalk’s.

New Road Nursery specialised in Mr Hollis’s time in chrysanthemums and geraniums. Among the latter the nursery grew a number of leading varieties including Paul Crampel, Queen of Denmark and Decorator. The site, apart from its sixteen greenhouses, had six boilers with several thousand feet of iron piping. When Harold decided to retire in 1959 the nursery was sold by auction in more than 200 lots and the catalogue revealed exactly what tools and other equipment lay in each greenhouse or shed. Coincidentally, 1959 was the same year that the neighbouring Kingsway Cinema stopped showing films and became a Bingo hall so two significant features of Hadleigh life died together. 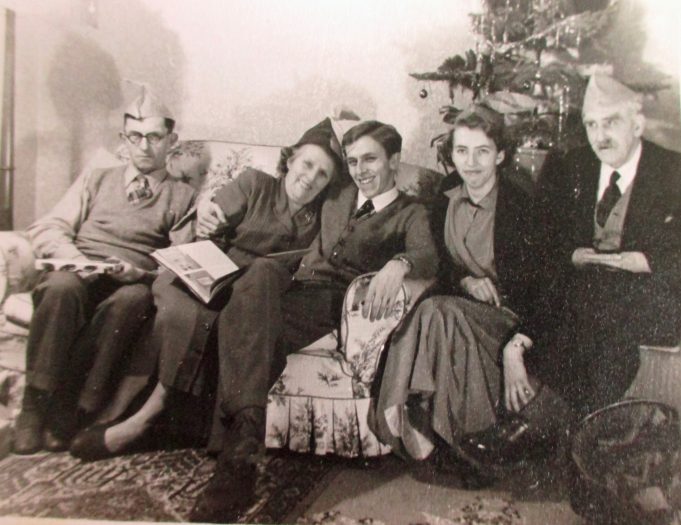 The Hollis family at Christmas

The picture above shows left to right Harold, Betty, Richard, Peggy and Mr Newman, the next door neighbour at Kenwood, who was always invited to the Hollises for Christmas Day.

The author of this article is much indebted to three good people who from afar have taken a considerable interest in the Archive: Vivienne Salmon from West Susssex, Thelma Jones, from Lancashire and David Maughfling who lives in Gloucestershire. The last named who was married to Peggy Hollis has kindly allowed access to his late wife`s collection of family photos. Thelma is the daughter of Maurice Yeaxlee, the Hadleigh draper, and she has been digging around in her photos and her memory to supply the archive with valuable information about Hadleigh as it once was, including the Nursery. Vivienne, formerly a Thundersley resident, has proved herself a valuable friend to the Archive for some time now. It was she who visited David Maughfling and who has been in close touch with Thelma and who, with their permissions, passed on all her discoveries to the Archive.

Would anybody like to add their memories of the nursery? It is easy to do. Just fill in the comment form below and follow the instructions.