From Carpenter to Photographer

Quite recently I acquired from eBay this photographic studio portrait of a very pleasant looking but unknown couple. As you will see from the picture the photographer was G.W.Roberts. Apart from his studio portraits he was responsible for the photos on a good number of local postcards. 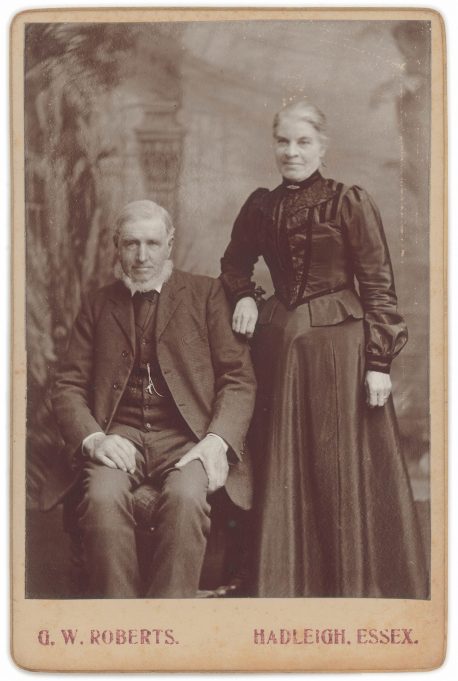 George William Roberts was born in fairly humble circumstances in Chelsea in 1844. His father, who was a bonnet presser, died when George was only six. His mother, Sarah, was a bonnet maker and she brought up George and his surviving sister, Amelia, in straitened circumstances but saw that George went to school. By the time he was 17 he was already a working carpenter which occupation he pursued for many years. He married Hannah Hubbard in 1864. They set up home in the Marylebone district of London and gradually improved their lot. By 1881 George and Hannah had found a larger house and were taking in lodgers to add to their income from George’s carpentry.

At this point there is a break in our evidence as the Roberts do not appear, for reasons unknown, on the 1891 census but by 1901 they are living at 5 Tessier Villas on the London Road, Hadleigh, and George has turned photographer. This occupation continued with him until his death in 1923. Before 1911 George and Sarah, who had no children, had moved into a house on the corner of Rectory Road and Poors Lane called Woodbank. Sarah died at 81, a year after George.

Exactly when or why George took up photography we do not yet know. Suffice it to say that judging from the evidence provided by the portrait above he was skilled in his second profession. The arrival of the postcard around 1903, which became the early twentieth century’s email with postal deliveries several times a day, provided photographers with ample opportunity to widen their scope and increase business. Over the years from Edwardian times onward Hadleigh housed a number of photographers who took advantage of this new phenomenon of the twentieth century.

The Archive would love to hear from anyone who can shed more light on George Roberts and his photography.